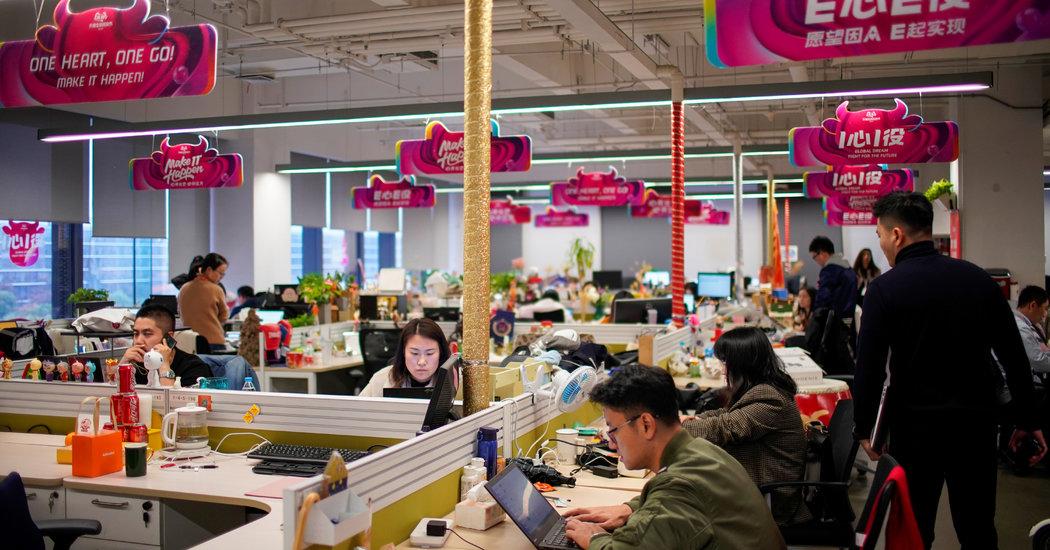 
HONG KONG — Shops are shuttered and tear gas still fills the streets, but that hasn’t put off investors looking for places to park their money.

Alibaba, the Chinese e-commerce giant, on Tuesday raised $11.2 billion in Hong Kong, a Chinese territory that has been mired in political chaos for six months.

Alibaba shares began trading there on Tuesday at $23.90, more than a dollar more than the offering price of $22.50 a share set by the company last week. It was just slightly lower than Alibaba’s original target of $24.

Alibaba’s share sale was the largest offering of any kind in Hong Kong since 2010, according to data from the stock exchange. The money raised by Alibaba will be added to the company’s cash pile, which now towers at $43 billion.

The successful listing is a boon for Hong Kong’s reputation as an international center for finance just when it needed a boost. A few times in recent weeks, lunchtime protests have filled Hong Kong’s financial district with tear gas and heavily fortified riot police. Some of the clashes between police and bankers have taken place just outside the territory’s stock exchange.

Earlier this summer, Alibaba said it would postpone its plans to sell its shares in Hong Kong as the protests turned violent. Over the summer months the stock market took a drubbing, losing virtually all of its gains for the year.

Still, Alibaba raised more money than executives had anticipated when it resumed its plan to sell shares. Alibaba runs online bazaars in which companies big and small can sell to Chinese consumers, and investors were drawn to that growth market despite both the protests and signs of a slowdown in the mainland. The company released extra shares last week to meet strong investor demand.

More broadly, investor sentiment has improved, even as protests have become more violent. Police have outlawed most large gatherings, leading to smaller protests that have consumed whole neighborhoods but have left much of the rest of the city unaffected. Despite transportation snarls and other problems, international companies have also been able to conduct business largely unimpeded.

Hong Kong’s stock market has now gained 5 percent for the year. Several other high-profile public offerings are scheduled before the end of the year.

The stock market got another boost on Monday, after local elections that gave the territory’s pro-democracy moment a stunning victory took place without trouble.

A former British colony, Hong Kong operates largely separate from the mainland but has long served as a critical bridge to China. For years, multinational companies made the city their headquarters for the region because it offered access to a booming Chinese economy while also ensuring legal protections and free flow of information.

Many Chinese companies use Hong Kong to dip their toes into international waters for the first time by listing their shares on the territory’s stock exchange. So far this year, companies including Alibaba have raised some $34 billion from investors, according to the exchange.

It has also loosened some of its rules in recent years to attract more companies. For example, last year it agreed to allow companies that list there to sell so-called dual class shares, which give founders of tech companies more say than ordinary shareholders.

Alibaba’s offering was its second. It listed its shares in New York five years ago in the world’s largest public offering, a record set to be eclipsed by the I.P.O. of Saudi Aramco.

While Alibaba’s Hong Kong listing could buoy other companies looking to raise money from the financial markets, it will do little to help smaller mom-and-pop shops in Hong Kong.

Businesses in Hong Kong have been increasingly affected by weekly demonstrations protesting China’s tightening grip on the city. In October, the government announced the economy had slipped into a recession as businesses and the financial sector that keeps the city humming took a direct hit. The economy is expected to report a recession for the full year, according to Paul Chan, the territory’s financial chief.