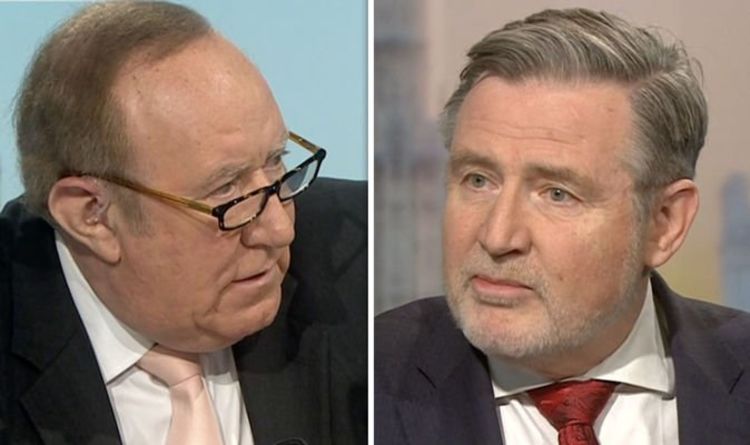 
BBC host Andrew Neil skewered Labour’s Barry Gardiner in a fiery clash over the NHS documents. Labour leader Jeremy Corbyn published the documents, claiming they left “Boris Johnson’s denials [about selling the NHS] in absolute tatters”. Mr Neil asked: “Is there anything in these papers that indicate that the British side has agreed to that?”

Speaking to BBC Two, Mr Gardiner said: “What you have is six meetings over a period of two years in which they have said that they’ve come to the point where they are now ready to draft the wording that would do into the eventual trade agreement.”

Mr Neil interjected: “No, they’re ready to draft the next stage of the negotiations on which they would be paced.

“I ask you again, is there anything in these documents to show that Britain has agreed to any of this?”

Mr Gardiner continued: “Can I just point out that if ministers are allowing civil servants to go on and negotiate this they are either in control of it in which they know what’s going on.”

READ MORE: Corbyn condemned by admiral: ‘He sides with terrorists!’

Mr Neil said: “Barry Gardiner, these are not negotiations, these are scoping out talks.

“For example, are you claiming we’ve agreed to full US market access to Britain?”

Mr Gardiner replied: “That is precisely what has been discussed.”

“You say they’re not negotiations and technically we can’t negotiate without Brexit.”

“You say they’re not negotiations and technically we can’t negotiate without Brexit.”

Labour has claimed 451 pages of official sensitive documents show the NHS is “up for sale” to Donald Trump.