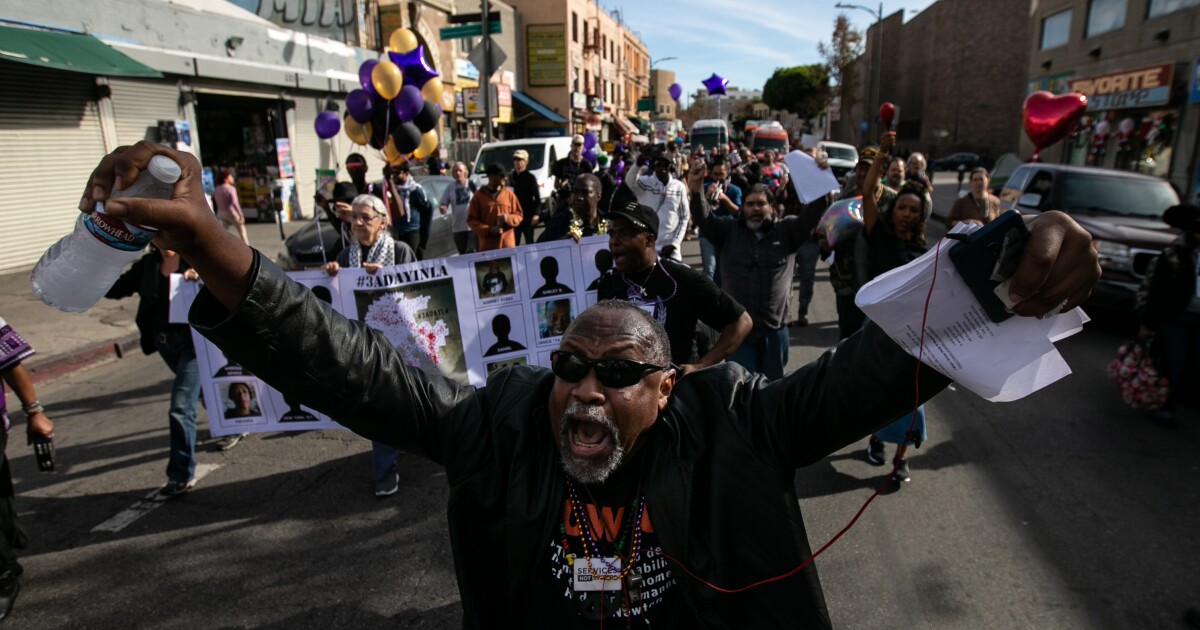 A joyous New Orleans-style Second Line parade to honor the roughly 1,000 homeless people who have died in Los Angeles County this year turned to anger on Friday, as skid row mourners stopped at City Hall to denounce elected officials for not halting the growing death toll.

Dozens of skid row residents and advocates, all decked out in Mardi Gras beads and flying black, gold and purple balloons, chanted: “Three a day! Too many!” They waved their fists at the windows of City Hall, where a homeless man in his 50s was found dead Tuesday night.

The parade and angry demonstration were part of National Homeless Persons Memorial Day, marked in dozens of cities.

L.A.’s day of mourning began soberly at the James Wood Community Center with prayers, songs and the traditional recitation of the names of all people who died at skid row missions and programs. Later, advocates planned to release candles at Echo Park Lake, where dozens of people have been living and dying in tents over the past year.

The Los Angeles County Public Health found in October that deaths among homeless people have increased each year, from 536 in 2013 to 1,047 in 2018. The tally so far this year is 963, they said.

Feuer and officials from several other cities and counties across California had asked the high court to either clarify or overturn the lower court ruling in City of Boise vs. Martin.

“The city attorney had the audacity to hold a press conference [about the death] … when, days before, his office was trying to figure out how to criminalize that man,” White said.

Feuer announced the man’s death at a press conference on Wednesday morning.

“He was someone’s son. He might’ve been somebody’s dad or somebody’s brother,” Feuer said. “I don’t know. But I do know that he died alone, and if there is any truth to statistics, he is not alone.”

The first parade to mark National Homeless Persons Memorial Day took off at noon Friday from San Julian Park, accompanied by drums, a trumpet, a keyboard, bicycles festooned with beads and Christmas garlands, and a giant banner that included photos of skid row residents who had died. It was labeled “Death by neglect” and contained a dot map of every homeless death site in Los Angeles County in the past year.

Several singers led the crowd in “Wade in the Water” and other civil rights anthems. Stephanie Arnold Williams, a longtime skid row advocate, sped around the crowd in red sequined skates, live streaming the parade on Facebook from a solar-powered tablet strapped to her back.

“When death comes to the doorstep of City Hall, you know we must respond,” White said. “We are going to set up shrines to show our people didn’t die in vain.”

Several of the dead were remembered by name, including Rodney Evans, who died on skid row waiting to get housing.

The parade eventually returned to the skid row corner where Darrell Fields, a longtime skid row street musician, was killed in August when his tent was set on fire in what authorities said was an intentional act.

Jonathan Early, 38, who also was homeless, has been charged in Fields’ death. The death — and that of his wife, Valerie, a month later — underscores the stakes in the epidemic of homeless deaths.

“Fields was a Jimi Hendrix impersonator in Las Vegas, and he was a better guitarist than Jimi Hendrix,” Anderson said. “It’s like genius is being snuffed out. This is all of our fight.”