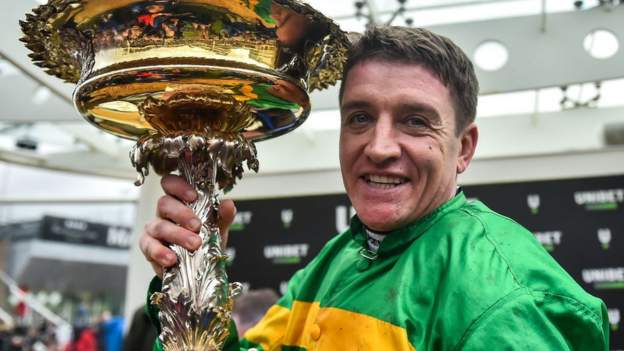 He won all the major races, including the Grand National in 2003 on Monty’s Pass and the Cheltenham Gold Cup with Kicking King and Bobs Worth.

“I am happy to say I’m announcing my retirement,” said Geraghty, the retained jockey for owner JP McManus.

“A big thank you to my family, friends and everyone who has supported me over the last 24 years.

“I’ve been blessed to have had a wonderful career and I’m looking to what the future holds.”

Geraghty replaced AP McCoy as the main man for McManus after the legendary jockey retired in 2015.

He bounced back from a succession of injuries to ride five winners at Cheltenham in March, including the Champion Hurdle on Epatante.

Geraghty, who was Irish champion jump jockey in 2000 and 2004, is the second most successful rider in Cheltenham Festival history with 43 wins, behind only his compatriot Ruby Walsh, who quit the sport last year.

While the timing and nature of his announcement, at 23:00 BST on Saturday via Twitter, may have been a surprise, Geraghty is bowing out at a similar age to McCoy and Walsh.

He broke his leg in a fall on the eve of last year’s Grand National, one of a catalogue of injuries.

Yet Geraghty remained at the elite level and one of his last winning rides was one of his best – guiding Champ from a seemingly forlorn position to win the RSA Chase at Cheltenham in March.

He will be remembered as a successful and likeable rider who managed to thrive in a golden generation of jump jockeys.