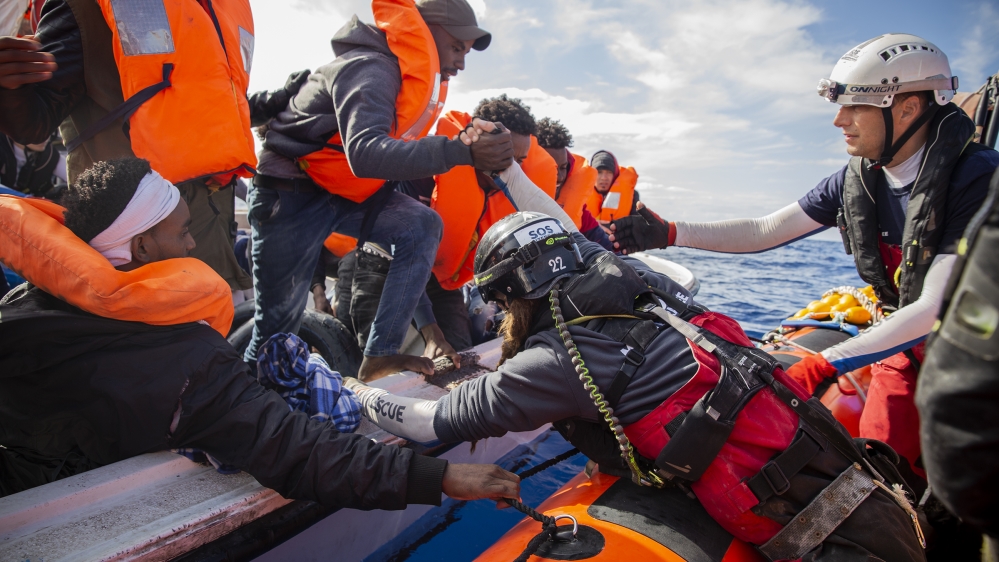 Onboard the Ocean Viking in the Mediterranean – Forty-two-year old Florent* took off his life jacket, knelt to the floor of the Ocean Viking, a migrant rescue vessel, and let out a roar.

He looked up, index fingers pointing to the sky as tears rolled down his cheeks, trickling between grease stains and cracked, dry skin on his face. His eyes were red, not least from the trauma of being out on the sea for more than 36 hours after spending five years in Libya.

“If I die right now, I’ll die with no regrets. I’ve managed to escape Libya. It was hell. Nothing less than hell,” Florent, from Cameroon, told Al Jazeera after being rescued together with 89 other migrants and refugees from an overcrowded rubber boat in distress in the central Mediterranean.

“If the Libyans [coast guards] come onboard right now, I will smash my head into that wall, slit my throat and jump into the water. That will be so much better than going back to Libya,” he said, the quaver in his voice evident despite the smile that belied the pain, agony and distress of the last five years he spent in the North African country.

Behind Florent was Karim*, a 16-year-old from Ivory Coast, whose dream of playing football in Europe led him to run away from home in 2016 without telling his parents.

Wearing Juventus football club track bottoms, Karim had a wide smile on his face, more out of relief than anything else, as he queued up for registration.

“You see this,” he said, pointing to his shoulder, “this is where a Libyan stabbed me when I asked for money for the work I did for him.”

He then pointed to his right leg. “This is where I was shot while waiting for work in Tripoli.

“There is complete lawlessness there. Everyone has guns and knives. There are no rights for black people, even someone who has been stabbed or shot.”

Libya acts as a major gateway for African migrants hoping to reach Europe. According to the UN, there are more than 40,000 refugees and migrants in Libya.

However, a 2018 UN report released highlighted that migrants are subjected to “unimaginable horrors” from the time they enter Libya, during their stay and in their attempts to cross the Mediterranean, if they make it that far.

These people arrive in Libya fleeing poverty, conflict, war, forced labour, female genital mutilation, corrupt governments and personal threats. Just the will to survive drives them away from home and into Libya, transiting through various countries on the way.

Some arrive into Libya by choice, others by force. For some, Libya is a country of destination and not transit. The promise of livelihood forces the testing and exhausting journey from home, unaware of what awaits them en route and also when they set foot in Libya.

“This journey is horrendous. It is perilous and very challenging,” Michael Farc, project coordinator for the medical charity Doctors Without Borders (MSF) onboard the Ocean Viking, told Al Jazeera.

“People generally have to deal with criminal networks and traffickers. There is extortion, abuse, physical and sexual violence and arbitrary detention where people are held for ransom, forced to contact their families to send money to secure their release. And once they arrive in Libya, they face the same situation.”

Libya, a large oil producer, has been engulfed by chaos since 2011 when longtime leader Muammar Gaddafi was killed in an uprising.

It is now split between two rival administrations: the internationally backed Government of National Accord (GNA) led by Prime Minister Fayez al-Sarraj, and the House of Representatives allied to renegade commander Khalifa Haftar and his Libyan National Army (LNA).

About 4,500 people are currently held in “official” detention centres across Libya. Thousands more are held in “prisons” run by armed groups. Both types are said to be overcrowded with unhygienic and inhumane conditions, with abuse and violence rampant. There is a shortage of food and drinking water, but an abundance of torture and forced labour.

These detention centres are not safe from the conflict either. One centre in the eastern Tripoli suburb of Tajoura was bombed earlier this year, killing at least 50 migrants and refugees and wounding more than 130. 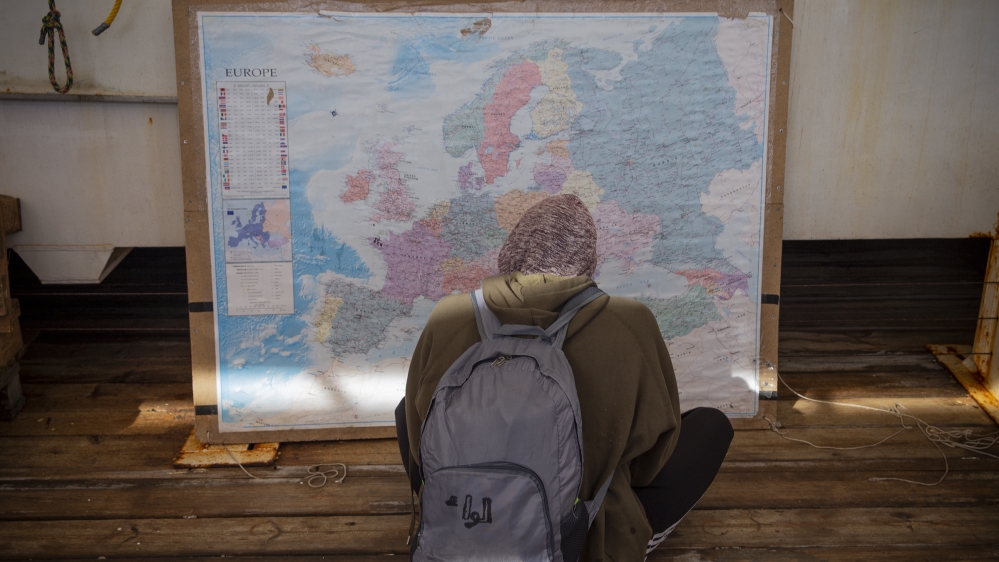 “The conditions in these centres are crazy,” 17-year-old Alkaol* from The Gambia said. “Sometimes you get food, sometimes you don’t. If they give you bread, you eat half and save half. You don’t know when you will eat next. If you don’t have money, your only way out is either escaping or death.

Saou*, from Central African Republic (CAR), described the time inside a prison as a “time between life and death”, adding many of his friends died there because of the brutal conditions.

The capital Tripoli has been under attack since April from forces loyal to Haftar.

More than 1,000 people have been killed during the battle for Tripoli, according to the World Health Organization, which said at least 5,750 were also wounded and about 100,000 civilians forced to flee their homes.

“In most of the stories you hear from the rescued people, the common denominator is violence, both sexual and physical,” Juan Pablo Sanchez, an MSF medic on the Ocean Viking, said.

“We had many people who suffered physical violence: Electrocution, wounds by knives and machetes, gunshot wounds and also being beaten up by rubber and metal pipes.”

This year, the International Organization for Migration reported more than 10,700 arrivals into Italy. But according to its Missing Migrants project, more than 740 people have died making that sea crossing to Italy or Malta.

They often wait weeks or months waiting to board the flimsy inflatable boat, fully aware of the fate of those preceding them – but oblivious of the demands and length of what seems like their final journey.

Some are told it’s a small river they have to cross, the lights at the offshore oil rigs – just over a 100km (62 miles) away – pointed to as their destination. Others are reminded of the successful journey made by those before them.

Everyone is scared, unsure of what awaits them. Among them was Kelly*, a 32-year-old from Ivory Coast into her eighth-month of pregnancy, and 19-year-old Victoria* from Cameroon with her three-year-old daughter, juggling her decision to “leave or die”.

“In life, when you see you’ve lost everything, you’re not afraid of anything anymore,” Saou said with a smile. “You don’t see the waves. You just see a boat. And that’s your chance to get your freedom again, far away from Libya.”