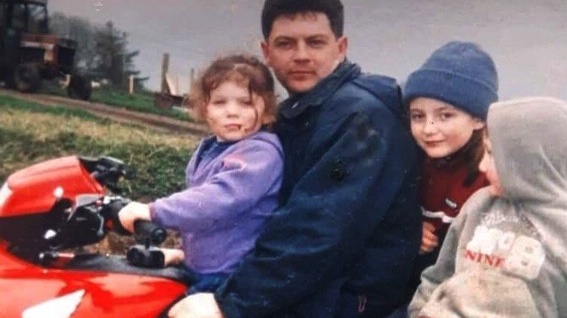 Leah Cull loved living on “the highest peak” of the Arigna mountains in Co Roscommon but after losing her father and brother there “I believe it is cursed”.

In May 2014, Oweney Cull, then in his early 40s, died by suicide a few fields away from the family home. On a wet night last August his son James (20) went to the same place and took his life.

Leah says both men reached out for help but were met with a “broken” mental health service which failed them.

“I know the system was bunched before Simon Harris was even born but where is the leadership?” asked the 23-year-old. “As a nation, we are great now at saying ‘It’s okay to not feel okay’ but there is nothing after that. There is nowhere to go unless you have a few thousand euro and can go into a private ward.

The Roscommon woman, now based in Australia, says she would never know if her loved ones could have been saved but neither got the help they needed.

Her father, an outdoor worker with Roscommon County Council who kept sheep on his farm on the mountain, slid into a depression because of financial worries, she believes.

“My mother and father were the most in-love couple you could meet. We had a really happy childhood,” she says.

But her father changed after a tax audit and a visit from Revenue officials, she says. “He lost a lot of weight. He was grey. He felt he had let us down.”

She was 18 at the time and her father told her she might not be able to go to college. “I said it was fine but he was upset.”

A week before he died, Oweney Cull rang his wife Claire from work and said “I need help”.

They went to the emergency department in Sligo hospital and waited for hours, before being told they had a Roscommon address and should be in Roscommon, recalled Leah.

She says when he was eventually admitted her father was in a psychiatric ward where another patient “screamed 24/7”. The nursing staff could not have been kinder but “I would not put my dog in that ward. My dad was having a breakdown. He needed to be on his own.”

Leah Cull says a change in mindset was needed about services for people with mental health issues.

“It may sound trivial but why does everything have to be grey on these wards? What is wrong with a splash of yellow? And why the prison vibe? Imagine feeling depressed and hearing the ward door locked behind you.”

Leah’s father was discharged after a few days but in less than 48 hours he went out to the fields sometime between 3am and 6am and died.

“I firmly believe that he was worse when he came out than he had been going in.”

Oweney’s son James, who was just 15 when his father died, took over the farm work. He seemed to cope well but one night two years after his father’s death, he rang his sister and said “can you come over I am having a heart attack?”.

James struggled with anxiety and depression for a few years.

Last December, he self-harmed. His mother struggled to get help for him and last August he spent a weekend in a psychiatric unit.

The family was no longer living in Arigna but James took his mother’s 4×4 on the night he died and drove there. Tragically, Claire Cull figured out where he was but could not get to him on time.

“She was talking to him on the phone and he told her he could see the lights of the car coming but he said ‘I am sorry Mammy, it is too late’. He said ‘I am sorry. I tried. I am going round in circles’. He always protected Mammy. He was obviously not in his right mind,” says Leah.

James was buried on the day before his 21st birthday leaving his mother , his sister and his younger brother Brian (13) heartbroken.

Leah Cull’s online posts highlighting her family’s experiences have been viewed hundreds of thousands of times and have been raised in the Dáil.

In a statement, a spokeswoman for Harris said funding for the National Office for Suicide Prevention had increased from €3.7 million in 2010 to the current level of €13 million. She said €39 million had been added to the mental health budget for 2020, increasing the annual allocation to €1.026 billion.

A spokeswoman for the Revenue Commissioners said it could not comment on the tax affairs of individuals but all cases were “treated with the appropriate sensitivity and consideration”.

There was a process in every case and if there was “no meaningful engagement” Revenue had no alternative but to use debt collection/enforcement sanctions to protect the exchequer, she added.