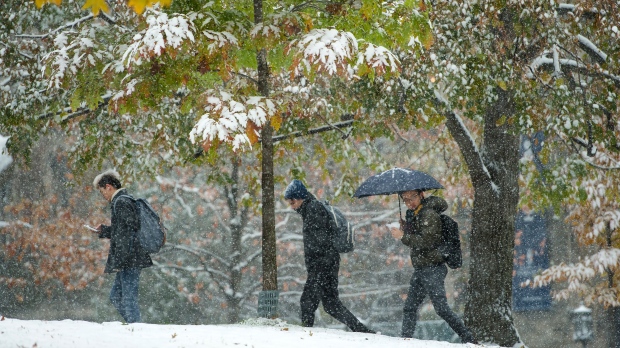 
TORONTO —
In the past 24 hours, while there have been hazardous, winter-like conditions across Ontario and snowfall warnings in Atlantic Canada, it might come as some head-scratching consolation to know that Environment Canada is predicting a mild winter ahead.

On Monday, senior climatologist Dave Phillips told CTV’s Your Morning there is “good news for Canadians” because he’s predicting a “milder than normal winter,” and he doesn’t foresee any “below-average temperatures for any place in Canada.”

“From coast to coast, the flavour of this particular winter — the personality — will be warmer than normal,” he said. “I don’t think it’ll be memorable.”

His prediction slightly contrasted other earlier forecasts which each suggested it will be a cold, harsh, snowy winter.

Phillip’s forecast appears to be more in line with Accuweather’s winter forecast which had predicted milder than normal temperatures across parts of Canada.

He acknowledges that, although the forecast isn’t going to be 100-per-cent accurate for the next 90 days (end of February), the “dominant flow, the dominant pattern will be warmer than normal.”

Phillips said what will “make or break our winter” is a potential “polar vortex” which is a large pocket of cold air swirling across in the Arctic that can wreak havoc if it moves south.

When polar vortexes weaken and migrate to Canada and the U.S. they brings all that cold, arctic air. Last February, a polar vortex lingered across Western Canada, bringing temperatures that made it “the coldest in Calgary it’s been in 83 years.”

He noted that last year was a longer, more brutal winter than average as “it went from Halloween to Easter.”

But Phillips’s sense is that, this year, it won’t be a “shorter-than-normal winter but a normal 90-to-100-day (winter) … spring will be here earlier than you think.”

He added, “as long as it’s not two months of polar vortex then I think we’ll be fairly happy.”