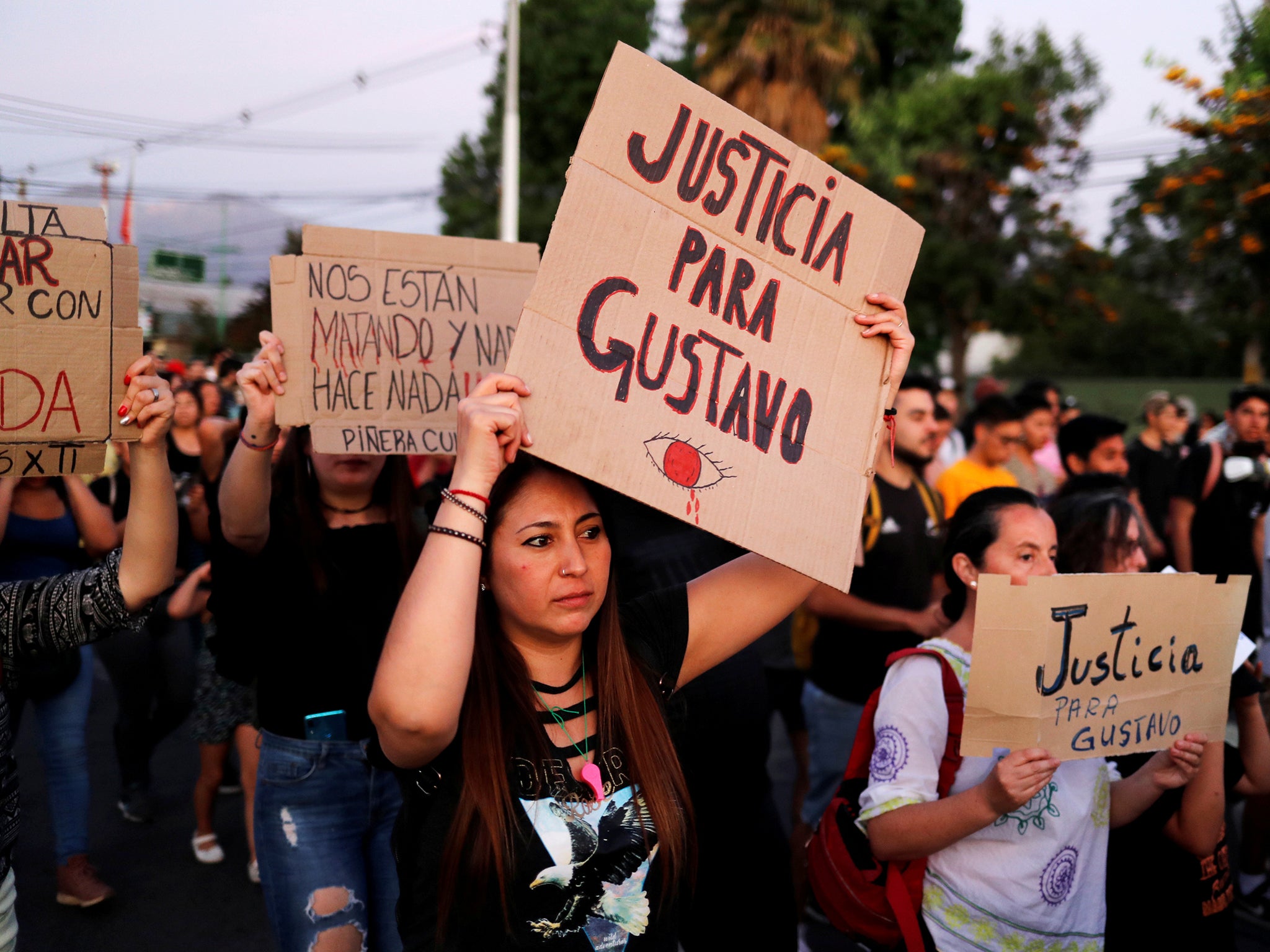 Protesters against Chile President Sebastian Pinera’s government have rallied around a student blinded by police rubber bullets and his family hopes a photo capturing his injuries will increase international pressure on the administration.

Gustavo Gatica’s name is shouted at police, borne on placards and scrawled on walls around the city.

Mr Gatica was taking pictures of a protest when he was hit on 8 November.

His case became a lightning rod in Chile for fury directed at police for alleged widespread human rights abuses during more than six weeks of demonstrations over social inequality that have left at least 26 people dead and 13,000 injured, according to prosecutors and human rights organisations.

He is one of two known cases of people left completely blind but at least 241 Chileans have suffered from eye injuries during the protests, according to Chile’s Institute for Human Rights (INDH).

Mr Pinera has sought to mollify protesters with a spending package and a vote on a new constitution, but the marches continue and spiked last week when doctors confirmed in a statement they had been unable to save Mr Gatica’s eyes.

The interior minister Gonzalo Blumel said last week that the Mr Gatica case was “deeply painful” and made clear police protocols around the use of force needed to be revised. Mr Pinera was not immediately available for comment.

Police have suspended the use of rubber bullets except in cases of threat to life.

Mario Rozas, the Chilean police chief, said in an interview with CNN three days after the shooting that he had identified the officers who fired rubber bullets and the force was cooperating with prosecutors.

“I deeply regret what Gustavo suffered,” he said.

Police declined to comment further as the case is under investigation, but said they were studying “profound” reforms to ensure “better protection of human rights”.

Mr Gatica and his parents declined to be interviewed by Reuters.

Speaking on behalf of the family, Gustavo’s brother Enrique Gatica told Reuters in the family’s home town of Colina, 19 miles from Santiago, that his brother was still following the protests and willing them on.

“If fear and repression triumph, if we return to all the indignities we were living with as a society, it would be extremely painful,” said his brother, who is studying for a history doctorate and previously worked as an educator at Chile’s Villa Grimaldi human rights organisation.

He added that his brother was conscious of the power of his case to effect change. “If it serves to renew the protests’ energy, to ensure change is achieved, he feels it would be worthwhile,” he said.