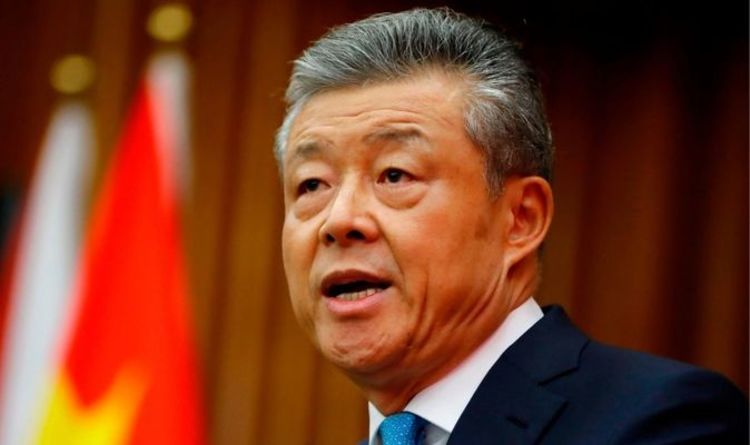 
China’s ambassador to London, Liu Xiaoming, warned the UK it would “pay the price” if it shunned Beijing. Mr Xiaoming was remarking on the heated disputes over the Hong Kong tech giant Huawei and the alleged human rights abuses in Xinjiang.

He said Britain was at a “critical historical juncture” in how it wanted to treat China.

Mr Xiaoming was speaking at a live news conference broadcast on Twitter when he made his remarks.

He rejected any claims made about the abuses towards Uighur Muslims.

During the conference, he also criticised the Government’s decision to exclude Huawei from the UK’s 5G network.

He also urged the UK not to interfere with China’s affairs in Hong Kong.

He said: “These actions have seriously poisoned the atmosphere of the China-UK relationship.

“China respects UK sovereignty and has never interfered in the UK’s internal affairs.

“I think they quote my remarks out of context.

“But, if you do not want to be our partners and our friends, you want to treat China as a hostile country, you will pay the price.

“That means you will lose the benefits of treating China as opportunities, as friends.

“And you will bear the consequences of treating China as a hostile country.”

Mr Trump’s administration has encouraged allies to distance themselves from Beijing.

Britain’s Foreign Secretary, Dominic Raab, has said the UK-China relations would not return to normal amid the disputes between the two countries.

The Chinese ambassador urged the UK not to follow in the footsteps of other countries.

Mr Xiaoming said: “It’s our hope that the UK would resist the pressure and coercion from a certain country and provide an open, fair, transparent and non-discriminatory environment for Chinese investment so as to bring back the confidence of Chinese business in the UK.”

He added: “It’s hard to imagine a global Britain that bypasses or excludes China.