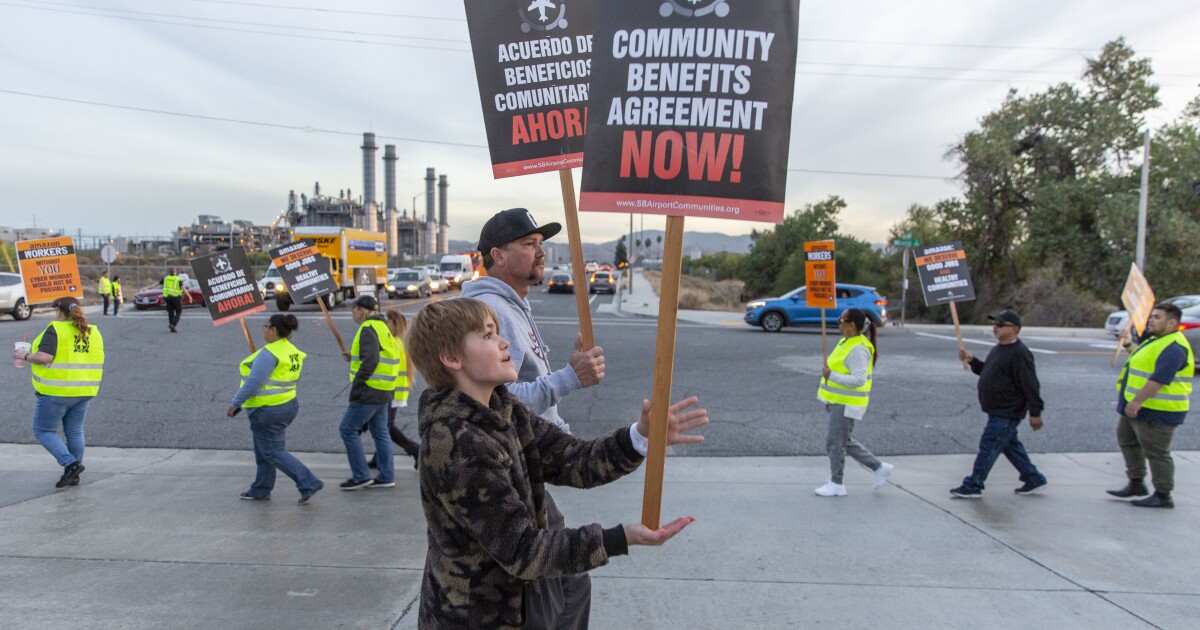 Amazon hasn’t divulged exactly how much it hauled in on Cyber Monday, but the company did say it had its biggest sales day ever.

And CNN Business reported that the day’s sales from all sources topped $9 billion, a 17% increase over last year’s haul. One-third of the purchases were made on smartphones.

I suppose this is good news in some quarters, consumer optimism being high and all that, but I’m pretty sure we are now one or two packages away from the end of the world. I don’t know about you, but I’m feeling a pang of nausea at the news of our impulsive, record-setting gluttony and bad taste.

For many years, I righteously lamented the end of brick-and-mortar retail, and the death of so many bookstores, but somewhere along the line I, like many others, waved a white flag and signed up for Amazon Prime.

A few months ago I needed a specific curry paste for a recipe, and I could have searched for it somewhere in Los Angeles, maybe at the fabulous Atwater Village shop called India Sweets & Spices.

But I was busy, and convenience won out over conscience. The paste was available on Amazon, of course. What isn’t? It was at my door and into the skillet in a day or so, with enough packing material to contain one of Budweiser’s Christmas Clydesdales.

The culture has been so dramatically transformed by the ease of internet shopping, I don’t know if we’ll ever return en masse to Main Street or even to the malls that once seemed so revolutionary.

But the pushback is well under way, including right here in Southern California.

On Cyber Monday, while the rest of us were shopping, Tom Dolan joined the picket line outside one of Amazon’s big distribution centers in San Bernardino.

Dolan, director of Inland Congregations United for Change, and at least 100 other people temporarily blocked departing trucks as they protested working conditions for Amazon employees and the impact of thousands of deliveries on air quality.

Deliveries that were headed to my house, and maybe to yours, too. Because we just can’t help ourselves, can we?

The unemployment rate in San Bernardino and Riverside counties has dipped dramatically, thanks largely to Amazon and related industries, many of them located near an airport complex slated to be upgraded to handle far more truck and air-freight deliveries in coming years. But Dolan said the region has paid a stiff price for playing host to one of the biggest corporations in the world.

“Definitely jobs have been created, but they’re not good-paying jobs. Fifteen dollars an hour cannot sustain a family in Southern California … and the impact on the environment is not something to be minimized,” said Dolan, who suffers from chronic respiratory problems. “It’s affecting tens of thousands of families, mine included.”

And the protests weren’t just here. In New York City on Monday, demonstrators rallied outside the home of Amazon honcho Jeff Bezos. They chanted “Bezos, Bezos, you can’t hide, we can see your greedy side,” among other barbs, at a man whose net worth is estimated at more than $100 billion, but whose company has enjoyed generous subsidies and paid nothing in federal taxes for 2018.

In an Amazon statement printed Monday in The Times, the company said “self-interested critics, particularly unions and groups funded by our competitors, have a vested interest in spreading misinformation about Amazon but the facts tell a different story.”

The company said it has invested $270 billion in the United States since 2011, created more than 400,000 jobs, committed to a $15 minimum wage and pledged to reach net zero carbon emissions by 2040.

But this comes in the wake of a storm of negative news, including published reports of warehouse worker deaths, and of employees complaining about oppressive pressure to fill and ship orders as quickly as possible.

“Ruthless quotas at Amazon Are Maiming Employees,” said the headline of an investigative report last week by the Atlantic and Reveal.

The story said records at 23 of Amazon’s 110 fulfillment centers indicated “the rate of serious injuries for those facilities was more than double the national average for the warehousing industry.” The story told of an employee who suffered a back injury at a Riverside County Amazon facility where 422 injuries were recorded last year.

Eric Guillen told me he worked for Amazon in San Bernardino for five years, suffered a back injury, and found the pressure to speed up so onerous, he eventually quit. He said he would get grief if he didn’t meet prescribed quotas for pulling boxes off a conveyor belt, using an electronic device to scan them, and loading them onto pallets.

“There was a feeling of being expendable, and there’s a lot of pressure to meet rates that are unattainable,” said Guillen.

“A supervisor would always give us grief about it and post the rates on the boards in the break rooms to incentivize us, to push harder,” he said. “It creates an unsafe work environment and you’re pushed to the limit.”

This reminds me of my 2011 column about laundry workers at the Disneyland and Paradise Pier hotels in Anaheim whose laundry-folding efficiency was displayed on scoreboards. The employees referred to the system as the “electronic whip.” So it’s fair to say that not everyone thinks of that part of Southern California as the Happiest Place on Earth.

Back to Amazon, Dolan said internet shopping is probably here to stay and all the related logistics industries may continue to expand in the Inland Empire. But he doesn’t think that means communities should stop fighting for wealthy corporations such as Amazon to pay living wages with good benefits and safe working conditions and to better mitigate the environmental impacts of such massive shipping operations.

“Amazon talks about investing $2 billion in this region, and my question is, ‘Where does that $2 billion come from?’ It came from the region. It’s not money Jeff Bezos inherited from his grandfather,” Dolan said, and part of it came from the sweat of employees who don’t earn a living wage while working for one of the richest men in the world.

And the rest of Bezos’ fortune? It came from those of us who should maybe think about making our next purchase at a local book store or shop — while a few of them still exist.