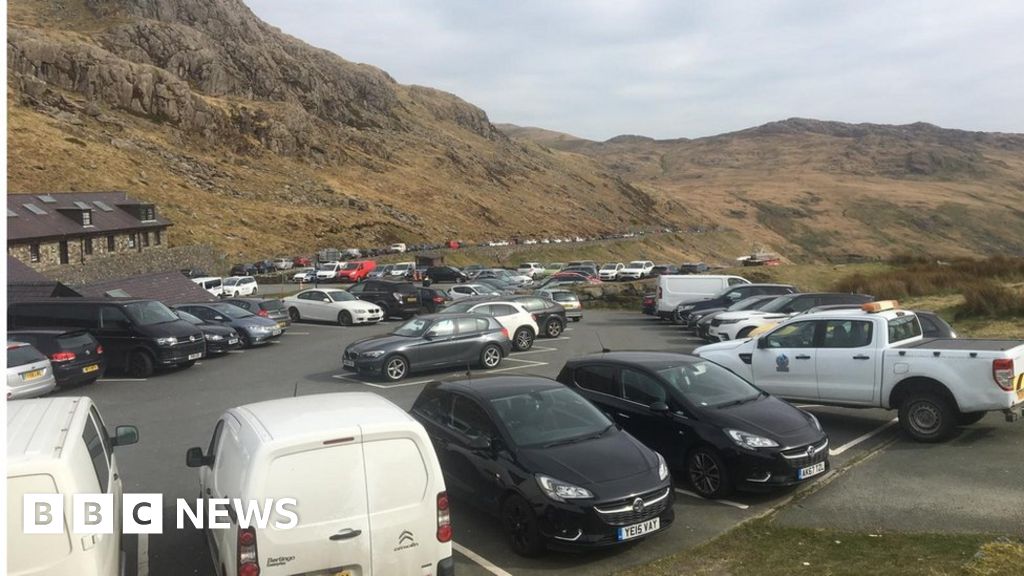 Car parks and trails could be shut to stop people from visiting Snowdonia National Park after “unprecedented scenes” on Saturday, according to bosses.

There were so many people on mountain summits it was “impossible to maintain effective social distancing”.

Pen y Fan in the Brecon Beacons was also busy with visitors on Saturday.

Welsh ministers are considering their legal powers to force people to stay away during the coronavirus outbreak.

It comes as seven more people in Wales died after contracting the virus, taking the total number of deaths to 12.

There have already been calls from local politicians and medics to encourage second home owners and caravan owners to stay away from Wales’ holiday hotspots, where some people have travelled to self-isolate.

They also urged them to adhere to guidance on social distancing to prevent the spread of Covid-19.

There have been similar appeals in Cornwall and the Scottish Highlands.

Chief executive Emyr Williams said: “The area has been overwhelmed with visitors.

“More worrying still is the significant crowding on the mountain summits and trails making it impossible to maintain effective social distancing.”

The authority is calling on the prime minister and first minister to provide “stronger measures on unnecessary travel and social distancing, to ensure that we do not see a repeat of yesterday’s scenes across Snowdonia”.

The park said: “If no further steps are taken we will need to take drastic measures to protect the communities and health services in north Wales, such as shutting down car parks and trails.”

I know people are concerned about caravan parks filling up & the movement of 2nd homers to rural parts of Wales . I was clear about this in my @WelshGovernment press briefing this morning @huwbbc . The @fmwales and I are actively considering our legal powers to directly intervene

Boris Johnson has warned the NHS could be “overwhelmed” if people do not act to slow the “accelerating” spread of coronavirus, as he urged the UK not to visit loved ones on Mother’s Day.

And Wales’ Health Minister Vaughan Gething tweeted to say that he and First Minister Mark Drakeford were “actively considering our legal powers to directly intervene” due to concerns about the influx of visitors to Wales.

How are mountain rescuers coping?

Mountain rescuers also made a desperate plea for walkers with Covid-19, or who are self-isolating, not to venture on to the hills and put them at risk.

They described it as an almost “bank holiday” atmosphere on the mountains and hills of north Wales on Saturday. From Moel Famau in the east and in Snowdonia, people were out in force.

Llanberis Mountain Rescue Team said it remained operational but the outbreak could have an impact on it being able to “call a team together” at times, with some of its volunteers in frontline day jobs.

Chairman Alun Allcock spoke out after the team was called to rescue an injured climber after a group of four had travelled to the area from Surrey on Saturday.

Central Beacons Mountain Rescue Team said it was hampered when a path was blocked by cars near Ystradfellte waterfalls on Saturday.

EASY STEPS: How to keep safe

What about the coast?

People seeking fresh air on the Welsh coast while coronavirus social-distancing measures apply have been warned against taking “unnecessary risks”.

The RNLI said beaches and coastal areas could see an increase in visitors over the weekend and beyond as people seek exercise in open spaces.

But the charity said the coast “can also present dangers”.

He said lifeboat stations and shops were currently closed to the public, but lifeboats and stations remain fully operational.

The RNLI told people to take note of signs at beaches advising of the local hazards, to check tide times to avoid being cut off and to check weather conditions before setting out as these can change quickly.