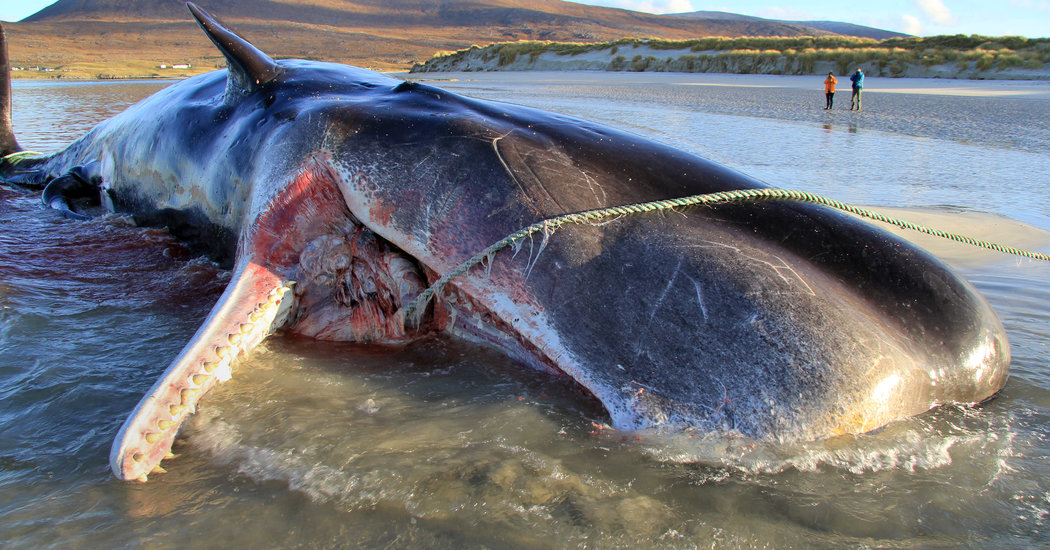 
A dead sperm whale that washed up on a Scottish beach had more than 220 pounds of tangled netting, rope, plastic and other debris inside its stomach, according to a local whale research group.

The 10-year-old male whale was found Nov. 30 on Luskentyre beach in the Outer Hebrides after becoming stranded on a sand bank, according to the group, the Scottish Marine Animal Stranding Scheme, which posted photos of the whale and details about it on Facebook on Sunday. The group described the mammal as about 46 feet long and weighing more than 20 tons.

The debris had formed a “huge ball in the stomach” that included “bundles of rope, plastic cups, bags, gloves, packing straps and tubing,” the group said. A photo showed a fishing net laid out next to the whale.

It was unclear whether the debris had contributed to the whale’s death, but it probably impaired its digestive process, Andrew Brownlow, the director of the Scottish Marine Animal Stranding Scheme, said in an email on Monday.

“What was unusual in this case was the sheer volume,” he said.

Dan Parry, a Facebook administrator of a group that works to keep Luskentyre beach clear of trash, said he had watched the necropsy. He also posted photos of the whale on his group’s page.

“We are a remote island, and this is floating in the ocean from all parts of the world,” Mr. Parry said of the debris in an email Monday.

The discovery of trash inside dead beached whales, dolphins and turtles is common. But whales tend to draw outsize attention because of the large amount of items they can hold in their stomachs.

The discovery in Scotland stood out because of the quantity of debris.

“This is an unusual but sadly not unprecedented case — sperm whales and other deep-diving beaked whales have been found stranded around the coasts of Europe for years with marine litter of some description in their stomachs,” Dr. Brownlow said. His group collects data on stranded marine animals around the country.

“This is a grim reminder of the effects of plastic debris in the marine environment,” he said.

Because of its size, the whale was buried on the beach with help from the members of the local Coast Guard and a local disposal team, according to the Scottish marine group.

“There was really no other option,” Mr. Parry said.

Regina Asmutis-Silvia, the executive director of Whale and Dolphin Conservation North America in Massachusetts, said that most dead whales do not end up on the beach like the one in Scotland.

“Some studies suggest that strandings account for as few as 2 percent of the number of whales who actually died,” she said.

“And while this stranding certainly draws attention to marine debris, a problem that we can all certainly help to resolve, it should also draw attention to the loss of the whale, a key player in our own survival,” she added.