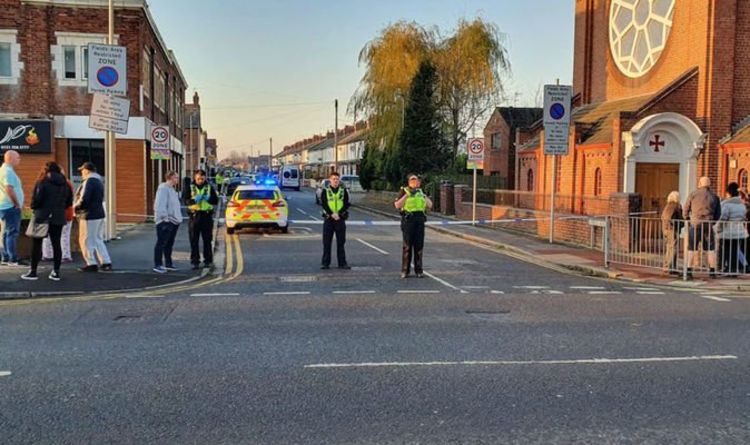 
Police were called to the scene at around 2.30pm.

A cordon is in place on Enfield Road at the junction of Whitby Road.

In a statement, Cheshire Police said: “At 2.25pm on Saturday 30 November police received a report of a firearm having being discharged on Enfield Road in Ellesmere Port.

“There is a large policing presence at the scene including armed officers and the area remains closed.

“The incident is in its early stages and the circumstances surrounding it are ongoing.

“The public are asked to avoid the area and if they have any concerns to speak to a local officer.

“If you have any information please contact Cheshire Police on 101 quoting IML 577560.”

A witness told the Liverpool Echo that a man was shot on Enfield Road.

They said: “Three men fired shots from inside a car and shot a man.

“Apparently it was just a passerby and not the man they were actually looking for.

“Police have cordoned off the road and the helicopter is up over the area.”

Ellesmere Port Police said on Twitter that the incident is not believed to be terrorist related.

They said: “While the incident on Enfield Road, and the circumstances surrounding it, remain ongoing we want to reassure the public that this is not believed to be terrorist related.”

In an earlier tweet, they said: “We are currently responding to reports of a firearm having been discharged in the Enfield Road area.

“Armed officers are at the scene and the road is closed. Please avoid the area.