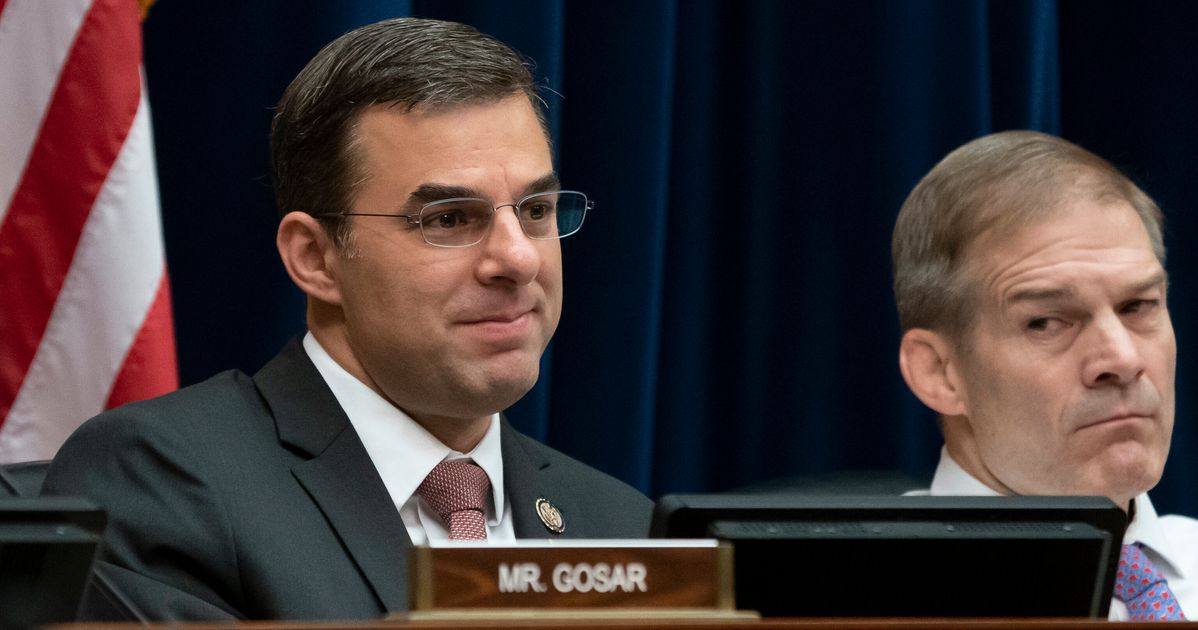 A group of 30 freshman Democrats in the House are working to have former Republican Rep. Justin Amash (I-Mich.) help present the argument for impeaching President Donald Trump to the Senate.

The group, led by Rep. Dean Phillips (D-Minn.), has asked House leaders to consider one of the more conservative voices in the chamber to be an impeachment manager for the Senate trial, The Washington Post first reported on Sunday. A spokesperson for Phillips later confirmed the efforts to HuffPost. Impeachment managers are representatives chosen by House leaders to make the case for impeachment to the Senate.

The reason behind the effort to recruit Amash, who left the Republican Party in July, is to diversify House Democrats’ attempt at swaying public opinion toward favoring impeachment by including a strong conservative voice. Democrats also hope bringing Amash in as an impeachment manager would quash Republicans’ argument that the left is pursuing a partisan impeachment.

“To the extent that this can be bipartisan, it should, and I think including Representative Amash amongst the impeachment managers is a smart move both for the country, for the substance and for the optics,” said Phillips, according to the Post.

The congressman also told the newspaper that Amash is qualified for the task because the Michigan libertarian is an attorney, a constitutionalist and “the first and only member of the Republican conference, when he was a Republican, to show courage.”

The House Judiciary Committee voted Friday to send two articles of impeachment ― abuse of power and obstruction of Congress ― to the full chamber for a vote. If the Democratic-majority House votes to approve the articles, they will then go to the Senate for a trial.

House Speaker Nancy Pelosi (D-Calif.) will ultimately make the final decision and is expected to announce impeachment managers this week, according to the Post. A spokesperson for Pelosi did not immediately respond to HuffPost’s request for comment.

Amash was not part of the House impeachment investigation, as he is neither in the House Judiciary nor House Intelligence committees that gathered evidence against the president. But the former Republican has long been a staunch critic of Trump and has been applauded by many Democrats for standing up against his party in order to stay true to his values and his interpretation of the Constitution.

The Michigan congressman called for Trump’s impeachment back in May, before he even left the Republican Party. His announcement came after he read special counsel Robert Mueller’s full report into Russia meddling in the 2016 election.

“America’s institutions depend on officials to uphold both the rules and spirit of our constitutional system even when to do so is personally inconvenient or yields a politically unfavorable outcome,” Amash wrote in his decision to become the first congressional Republican to call for Trump’s impeachment. “Our Constitution is brilliant and awesome; it deserves a government to match it.”

Amash has criticized his GOP colleagues who stood by the president’s side and defended him throughout the impeachment process. The congressman called House Minority Leader Kevin McCarthy (R-Calif.) incompetent and dishonest in September following a CBS “60 Minutes” interview in which McCarthy claimed Trump did nothing impeachable when he pressured Ukraine’s president in a phone call to investigate his political rival, former Vice President and 2020 Democrat Joe Biden.

More recently, Amash criticized Sen. Lindsey Graham (R-S.C.) and Senate Majority Leader Mitch McConnell (R-Ky.) for violating their constitutional oath to be impartial in the Senate impeachment trial by publicly stating that they will support the president despite acting as jurors.

“Senator Graham has chosen to violate his oath to support and defend the Constitution, his oath to do impartial justice in an impeachment trial, and his duty to represent all the people of his state, not just those who share his political views or desire a particular outcome,” Amash tweeted.

Senator Graham has chosen to violate his oath to support and defend the Constitution, his oath to do impartial justice in an impeachment trial, and his duty to represent all the people of his state, not just those who share his political views or desire a particular outcome. https://t.co/bjz5PlkHyk

The news of Democratic efforts to recruit Amash as an impeachment manager comes the same day Senate Minority Leader Chuck Schumer (D-N.Y.) sent a letter to McConnell laying out for the first time how Senate Democrats would like Trump’s impeachment trial to proceed.

In the letter, Schumer said he wants the Senate to hear testimony from several members of the Trump administration who have direct knowledge of the president’s wrongdoings. He also wants impeachment “housekeeping” to begin on Jan. 6, and for House impeachment managers to begin presenting their cases on Jan. 9. House managers would get up to 24 hours to make their case, followed by a presentation from the president’s counsel for up to 24 hours.

A spokesperson for McConnell told Politico that the Kentucky senator “has made it clear” that he expects to meet with Schumer to talk about “the contours of a trial soon.”