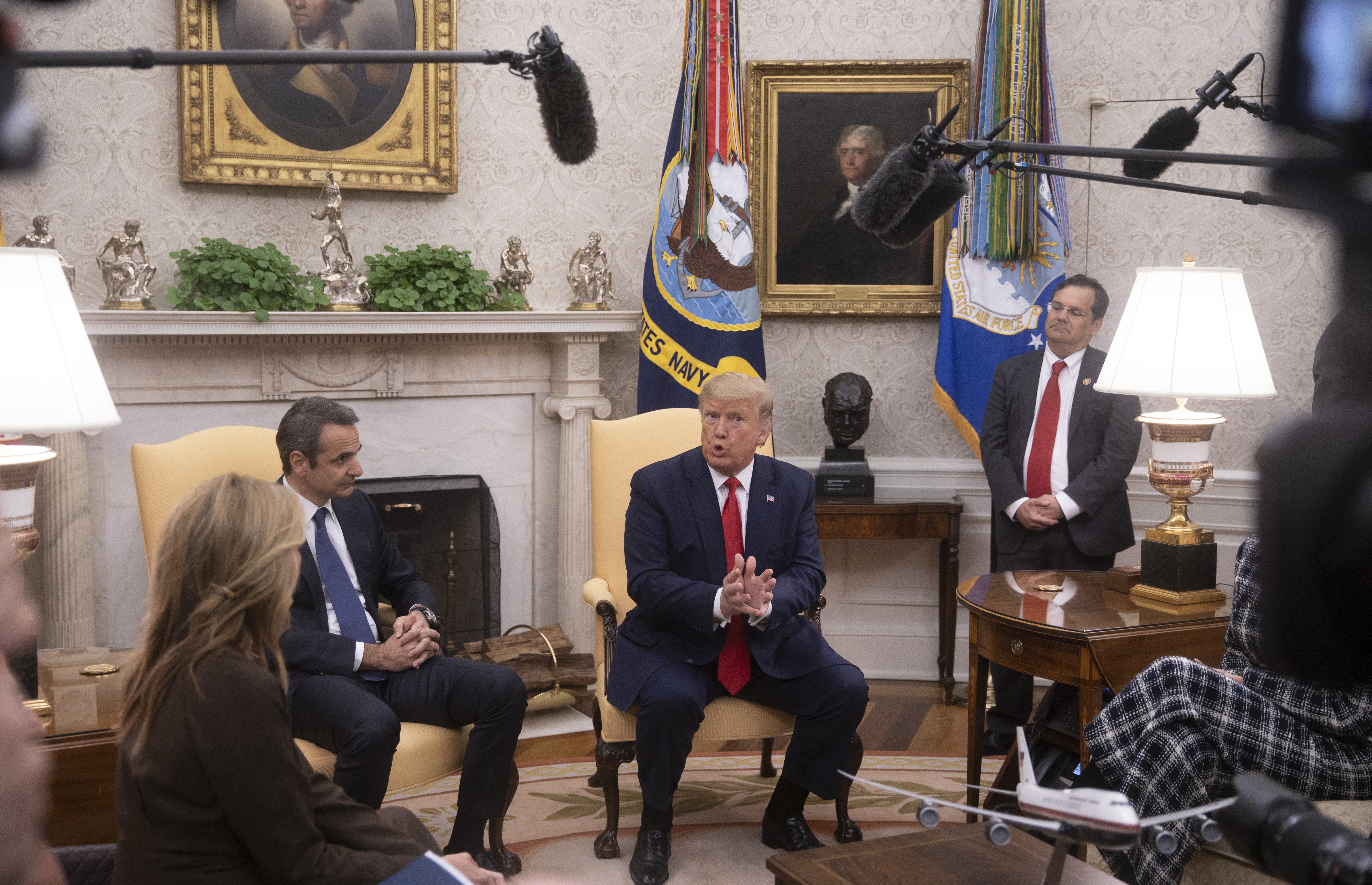 The January 7 White House meeting between US President Donald J Trump and Greek Prime Minister Kyriakos Mitsotakis did not yield any new US statements or a visible shift in existing policy regarding recent provocative Turkish behaviour near Cyprus and in the Eastern Mediterranean/Aegean that the Greek side was clearly hoping for since Washington’s standoff with Iran has taken centre stage.

However, that same discussion underscored the strong bilateral relationship and the essential strategic role that Greece plays in NATO and the indispensable nature of the US and NATO naval facilities at Souda Bay on Crete.

Meeting timing isn’t everything, but its important

The Trump-Mitsotakis White House meeting did not get scheduled as a result of deep strategic planning; it was simply the result of rescheduling the postponed Trump-Mitsotakis meeting originally set for New York on the sidelines of the September 2019 UN General Assembly and was officially announced early last month.  Last September Trump left for Washington hurriedly in response to the start of the impeachment process in the US Congress, and Mitsotakis’ primary opponent, former PM Alexis Tsipras, falsely claimed at the time that the New York meeting had not been officially agreed to by the American side, prompting the US Ambassador in Athens to confirm the meeting had in fact been fully approved and locked in.

The rescheduling for the White House in place of New York was also important to those who still monitor equities in Greek-Turkish relations, as Trump had received Turkish President Recep Tayyip Erdogan at the White House in November, despite Washington’s strong disapproval at the time of Turkish air defence system procurements from Russia.  It goes without saying there is nobody in the US capital who paid more attention to Tuesday’s Trump-Mitsotakis meeting than the Turkish Embassy in Washington.

Mitsotakis, like any leader planning to meet with Trump, has learned first-hand of the risks involved in agreeing to meet the US President.  Either one faces the risk of last-minute schedule changes/postponements or risks the primary subject of an encounter being hijacked by whatever hot new issue President Trump is facing.  Mitsotakis has had to deal with both problems, now that the US is moving close to being on a full war footing with Iran.  Most likely due to the Iran crisis, the White House decided late in the game not to schedule a joint press session with Mitsotakis at the end of the two leaders’ meeting.

Fortunately, early in his tenure as prime minister and with a solid majority in the Greek parliament, this Washington visit is not viewed as a “political lifeline” for Mitsotakis, as had been the case on many other occasions for other Greek leaders.

Since the visit was announced in early December, the Greek public has endured a full month of bombardment by the country’s plethora of “Americanologists” deciphering ad nauseum the deeper meaning of the Trump-Mitsotakis meeting, its timing and the sublime state of bilateral relations following the signature of the amendments to the bilateral defence agreement in October.  Unfortunately, over the same period, Greek-Turkish relations have deteriorated in the wake of Turkey’s actions to improve relations with one Libyan faction and to stake new claims regarding maritime borders in the Eastern Mediterranean.

The sublime state of bilateral relations

White House discussions between visiting Greek leaders and the US President invariably focus on the hot regional issues of the day, and there are always two of these hot topics or more, leaving little time to review the excellent state of the bilateral relationship.  In 2019, the US found itself in the favourable position of watching the incoming Mitsotakis government work hard to prove that it could be more “pro-American” in concrete terms than the previous PM’s socialist government which claimed that bilateral relations had hit their historic apex under its tenure.

This competition manifested itself quickly, with the incoming Mitsotakis government rapidly agreeing to a set of amendments to the existing 1990 Mutual Defense Cooperation Agreement (MDCA) last October that gave the US side the extended time horizon for Washington to program significant sums needed for expanding the Souda Bay naval facility on Crete and establishing a few other sites around Greece, which in turn supports more robust US and NATO operations in the Mediterranean and Middle East.  Ratification of the defence deal on the Greek side is expected shortly.

The cherry on the military cooperation cake is found in sharply increased Greek interest in the procurement of new US military equipment including F-35 fighters that Turkey coincidentally is no longer eligible to purchase, as well as several used US Navy vessels.  Although expensive, the Greek side has hinted that after 2024, it may be able to afford an F-35 procurement program with “help from its American friends.”

President Trump’s signature of the Eastern Mediterranean Security and Energy Partnership Act of 2019 (known also as the East Med Act) on December 20 last year, ensured that the Trump-Mitsotakis White House discussions focused considerable energy on this emerging regional topic, and strong bipartisan support for the new law in Congress guarantees that US engagement will outlive the current US President.

This trilateral cooperation scheme comprised of Greece, Cyprus and Israel lays out energy and security cooperation between the three countries with limited US participation, and effectively sidelines Turkey, without explicitly excluding it from future participation if conditions change, for as long as necessary while joint energy projects progress.

Mitsotakis arrived in Washington after a high-level signing ceremony was held in Athens January 2 between the energy ministers of Greece, Cyprus and Israel for the “EastMed” pipeline project intended to move gas from the eastern Mediterranean to Europe, with each country’s prime minister in attendance.  As currently envisioned, the 2,000-kilometer EastMed pipeline will be able to carry 9-12 billion cubic meters of gas a year from offshore reserves held by Israel and Cyprus to Greece, and then on to Southeastern European countries and Italy.  The EastMed pipeline is expected to make the three countries key links in Europe’s energy supply chain; if for some reason the pipeline is not built, the LNG will be shipped to Europe via tankers.

While not a US-funded project, American companies are widely expected to participate. Politically, the EastMed pipeline should help counter Turkey’s effort to extend its control to the Eastern Mediterranean.

Potential US investment in Greece’s recovering economy has been an important topic at high-level meetings between the two countries’ leaders for years, and unfortunately that discussion remains poised in the future tense.

Although Mitsotakis’ government hit the ground running last July on key economic issues and has avoided the populist policies chosen by many previous Greek leaders, after six months in power the new government does not yet have important economic successes to highlight in Washington but must instead point to a set of well-planned budgetary and pro-investment economic policies and reforms that will bear fruit in the long term, instead of the vote-buying practices popular in previous Greek governments.

Mitsotakis met with IMF Managing Director Kristalina Georgieva January 7 to pave the way for long-term cooperation and to argue the case for reducing in 2021 the existing 3.5% (of GDP) primary surplus target imposed on Greece by its creditors in 2015.  Mitsotakis announced in an earlier Washington meeting that he had assurances of the IMF’s strong support in his efforts to reduce the surplus target and added that IMF management had decided it would be closing down its once-controversial Athens office.

The January 7 White House meeting of the two leaders was preceded by a Q&A session that rapidly degenerated into a barrage of Iran/Iraq/Impeachment questions directed primarily at President Trump.  The word Greece was barely mentioned by the American press in attendance but Mitsotakis made a brave attempt to raise the Turkey/Libya maritime boundaries deal in front of the Washington press.  Seemingly unconcerned, they relentlessly moved back to questioning Trump, who in the interplay with reporters seemed to walk back his threat to bomb Iranian cultural sites when informed that could be viewed as a war crime.

Nevertheless, Trump tried to set the stage for the bilateral meeting by welcoming Greece’s economic “comeback,” using a term he has uttered on several previous occasions.

Nothing has been reported from Greek or US sources that indicate the US position on Turkey’s recent behaviour in the Eastern Mediterranean has changed as a result of the Mitsotakis-Trump meeting.  Washington has already signalled its disapproval of Ankara’s actions.

The Greek PM briefed local and travelling Greek press representatives and noted the PM was very satisfied with the White House meeting, especially President Trump’s strongly positive references to the state of the Greek economy and the country’s geopolitical role.

Working to feed the Greek media beast, the US Ambassador to Greece (visiting Washington) quickly released a statement summarizing the day’s bilateral interactions, without revealing much about the content of the bilateral discussions, which is the only official US read-out currently available:

“This is an exciting time for U.S.-Greece relations.  After a decade-long financial crisis, Greece has transformed itself and is a source of solutions, a pillar of stability, and a critical partner in America’s wider strategy in the Eastern Mediterranean and beyond.  Prime Minister Mitsotakis has gone to great lengths to reduce bureaucratic red tape, eliminate capital controls, expand Greece’s role as a regional energy hub, and cut taxes.  As a result, his message is:  Greece is open for business and ready for American investment.

Prime Minister Mitsotakis’ visit capitalises on the momentum following President Trump’s signing of the Eastern Mediterranean Bill into law on December 20, which recognizes significant U.S. security interests in the Eastern Mediterranean, and Secretary Pompeo’s stop in Athens this past October to sign the updated Mutual Defense Cooperation Agreement.  And Greece, Cyprus, and Israel’s signing of the East Med pipeline accord on January 2 builds upon the 3+1 framework that Secretary Pompeo set in motion last March in Jerusalem.

There is no doubt:  Greece is a country that shares our goals and our values.  We will continue to invest in our strategic partnership and build momentum to achieve our shared vision for the future.”

President @realDonaldTrump spoke to the press at the top of his meeting with Prime Minister @kmitsotakis of Greece—a nation that has made a tremendous economic comeback! pic.twitter.com/aJEopAgr8d