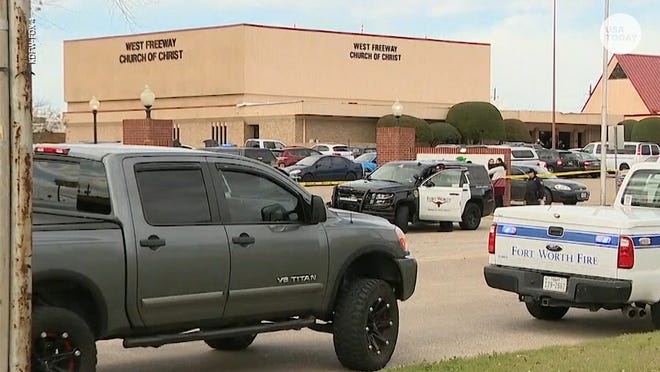 A volunteer member of a security team who is running for county commissioner is being hailed for saving lives by quickly ending a shooting Sunday at a North Texas church.

Texas Attorney General Ken Paxton described parishioner Jack Wilson as a reserve deputy with extensive training who has taught shooting at his own range.

Wilson was one of two congregants who confronted a gunman during an attack that killed two people at West Freeway Church of Christ in White Settlement, a town of about 17,000 people near Fort Worth. Paxton said Wilson was the one who brought down the suspect with a single shot.

“He’s not just responsible for his actions, which ultimately saved the lives of maybe hundreds of people, but he’s also responsible for training hundreds in that church,” Paxton said at a news conference Monday.

The Texas Department of Public Safety identified the victims as Anton “Tony” Wallace, 64, of Fort Worth and Richard White, 67, of River Oaks. Paxton said both were also members of the church’s security team.

The gunman was identified as Keith Thomas Kinnunen, 43. His motive is under investigation.

Investigators searched Kinnunen’s home in River Oaks, a small nearby city where police said his department’s only contact with the suspect came from a couple of traffic citations. “He didn’t exist until yesterday,” Deputy Police Chief Charles Stewart said.

Wilson, who is running for commissioner in Hood County, said in a posting on his campaign’s Facebook page that he’s thankful to be able to serve as the church’s head of security.

He added that Sunday’s events “put me in a position that I would hope no one would have to be in, but evil exists and I had to take out an active shooter in church.”

Texas officials lauded a state law that went into effect in September allowing weapons in places of worship unless the facility bans them. Paxton said the church’s security team was formally organized once the measure was enacted.

Licensed handgun owners can legally carry loaded weapons into Texas churches that do not have posted signs banning weapons. Church security became a major issue in the state after a gunman walked into a church in Sutherland Springs two years ago and fatally shot 26 people and wounded 20 others.

The Texas Department of Public Safety called the parishioners’ actions in quickly stopping the gunman “heroic.”

“We lost two great men today,” Britt Farmer, the church’s senior minister, said. “But it could have been a lot worse.

“I am thankful that our government has allowed us a way to protect ourselves. Please continue to pray for the West Freeway Church family.”

Tiffany Wallace told Fort Worth TV station KXAS that her father, Tony Wallace, was a deacon at the church and had just handed out Communion when the gunman approached him.

“You just wonder why. How can someone so evil, the devil, step into the church and do this?” she said.

Church officials would not be making any comments Monday until giving a planned statement later in the evening following a closed meeting for church members.

FBI Special Agent in Charge Matthew DeSarno said Kinnunen had roots in the area but is “relatively transient.” DeSarno also said the suspect has been arrested several times but did not specify on which charges

Parishioner Isabel Arreola told the Star-Telegram that she sat near the gunman and that she’d never seen him before Sunday’s service. She said he appeared to be wearing a disguise, perhaps a fake beard, and that he made her uncomfortable.

Then she saw him take out a shotgun, start firing and get shot himself.

“I was so surprised because I did not know that so many in the church were armed,” she said.

“This team responded quickly, and within six seconds the shooting was over,” Patrick said. “Two of the parishioners who were volunteers of the security force drew their weapons and took out the killer immediately, saving untold number of lives.”

‘Nothing is going to stop us being Jewish’:New York community rallies after anti-Semitic ‘terrorism’ attack

There were more than 240 parishioners in the church at the time of the shooting, authorities said, and the service was being livestreamed to countless homes.

“It’s tragic and it’s a terrible situation, especially during the holiday season,” said Jeoff Williams, a regional director with the Texas Department of Public Safety. “We have a couple of heroic parishioners who stopped short of just anything that you can even imagine, saved countless lives.”

In the livestream of the church service, the gunman can be seen getting up from a pew and talking to someone at the back of the church before pulling out a gun and opening fire. Parishioners can then be heard screaming and seen ducking under pews or running as papers fly to the floor.

Mike Tinius, a church elder, told The New York Times that one of those killed was a security guard and friend who responded to the shooter. Tinius said that he didn’t know the gunman and that the shooting appeared to be random.

The security guard “was trying to do what he needed to do to protect the rest of us,” Tinius said. “It’s extremely upsetting to see anyone committing violence.”

Gov. Greg Abbott issued a statement of condemnation for the “evil act of violence” at a place of worship.

“I am grateful for the church members who acted quickly to take down the shooter and help prevent further loss of life,” Abbott said. “Cecilia and I ask all Texans to join us in praying for the White Settlement community and for all those affected by this horrible tragedy.”