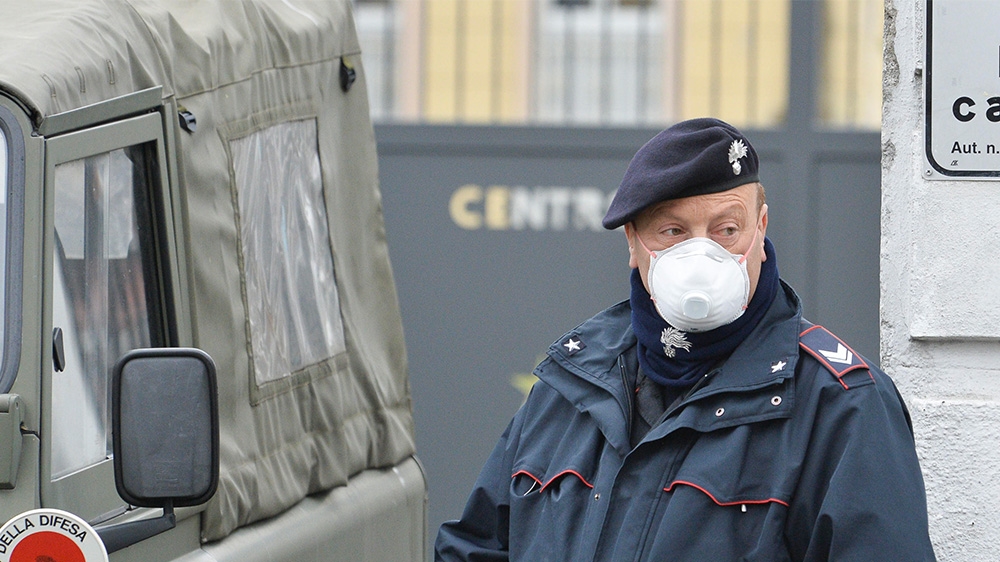 Italy has announced an unprecedented quarantine on its northern region of Lombardy and other badly affected areas on Sunday, impacting some 16 million people, as it steps up efforts to tackle Europe’s largest outbreak of coronavirus.

Prime Minister Giuseppe Conte early on Sunday issued a decree that severely restricts the movement of individuals in the northern region and surrounding areas in a move that came as the country is struggling the contain the virus’ spread, with the number of cases rising by 1,247 in the last 24 hours.

Another 36 people also died as a result of the virus, taking the total to 233.

In other recent developments, the number of people diagnosed with the new coronavirus now exceeds 100,000 worldwide, with several new countries reporting their first cases.

The World Health Organization (WHO) has called the spread of the virus “deeply concerning”.

Here are all the latest updates.

Moldova has registered its first confirmed case of the coronavirus: A 48-year-old woman who recently returned from a trip to Italy.

The coronavirus-stricken Grand Princess cruise ship has been given the green light to dock in Oakland, the tour operator said in a statement.

“Grand Princess will proceed to the Port of Oakland on Sunday to begin disembarking guests who require acute medical treatment and hospitalization,” the Princess Cruises tour company said.

“Guests who are California residents will go to a federally operated facility within California for testing and isolation, while non-Californians will be transported by the federal government to facilities in other states.”

The vessel, which has been stranded off the California coast for four days, recorded 21 cases on board, including 19 crew and two american passengers. 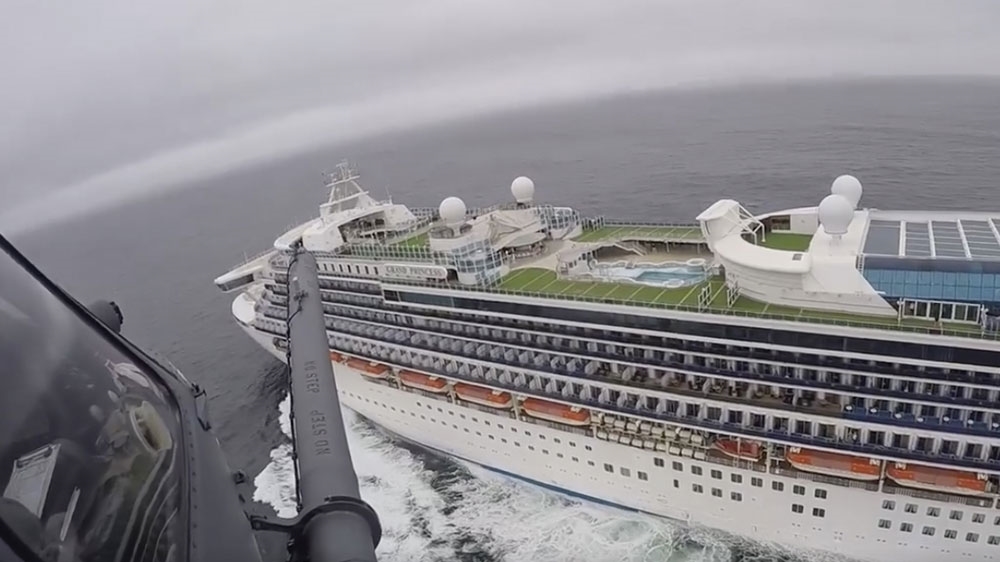 Of the 3,535 passengers aboard the Grand Princess, 21 people have tested positive for the virus [California National Guard via AP]

The Maldives has reported its first cases of the novel coronavirus in two employees working at a tourist resort. They are believed to have caught the disease after coming into contact with an Italian tourist who tested positive upon returning to Italy.

The two people are in a stable condition and have been put in quarantine at a facility outside the capital, Male.

This is Ramy Allahoum in Doha taking over from my colleague Kate Mayberry.

The death toll in the China hotel collapse has risen to six with 28 still missing, according to the Ministry of Emergency Management.

The building in Quanzhou, which was being used to house people under observation for the coronavirus, collapsed on Saturday evening.

Thailand and Malaysia have both barred the Costa Fortuna, with about 2,000 people on board including dozens of Italians, from docking at their ports.

Malaysian officials say there are about 64 Italians on board.

The Star, a local newspaper, reported earlier on Sunday that Malaysian ports had banned all cruise ships following a directive from the Ministry of Transport.

The Costa Fortuna is now said to be on its way to Singapore.

05:01 GMT – First case of coronavirus in US capital

A man in his 50s has tested positive for coronavirus in Washington DC, the first case in the US capital.

He was admitted to a Washington hospital on Thursday and appeared to have no history of international travel and no close contacts to any other confirmed cases in the US, Bowser said.

“With his test yielding presumptive positive, DC Health has started its investigation in keeping with CDC [Centers for Disease Control] guidelines,” Bowser said. The investigation includes tracing the man’s movements, though the mayor declined to say where in Washington the man lived.

State media in China say at least four people were killed in the collapse of a hotel in Quanzhou that was being used for coronvirus quarantine.

The Ministry of Emergency Management said five people who had been rescued were in critical or serious condition.

Rescue efforts continue. Some 71 people were thought to have been in the building when it collapsed suddenly on Saturday evening. 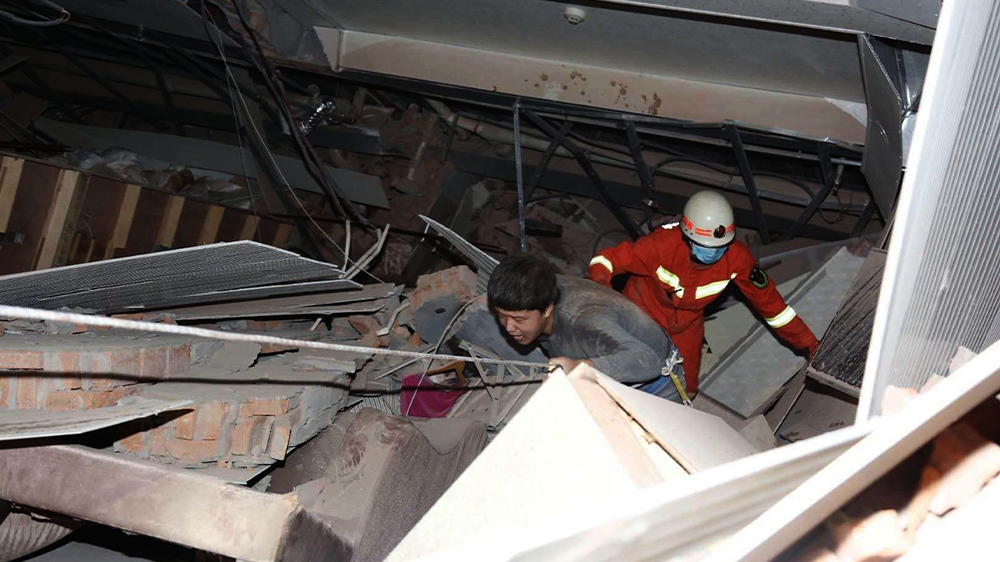 At least four people have been confirmed dead after a hotel in the eastern city of Quanzhou that was being used for coronavirus isolation collapsed on Saturday evening. [Xiao Fan/EPA]

Italy’s prime minister Giuseppe Conte says a strict quarantine will be enforced in the state of Lombardy and 14 other areas in the north that are together home to 16 million people.

“We want to protect the health of all citizens,” Conte told a press conference in Rome.

The quarantine will be the most draconian outside China, which sealed off Hubei province in January.

Nobody will be allowed to move in or out of the designated territories although exceptions will be made for reasons of health, professional needs and “exceptional” cases, Conte said.

South Korea is to start rationing face masks from Monday, limiting the number each person can buy each week.

South Korea’s Prime Minister Chung Sye-kyun on Sunday issued a public message, asking citizens to “actively cooperate” with the efforts to make sure healthcare workers and sick people have access to enough masks.

“Even if you feel inconvenient, I ask you to show a mature sense of civil awareness, based on concessions, consideration and cooperation so that people who really need face masks can buy them,” he said, according to Yonhap news agency.

The government has imposed export restrictions on masks and urged factories to increase production.

Rescue efforts continue at the collapsed hotel in the southeastern city of Quanzhou.

Chinese media say that 49 people had been rescued at 00:20 GMT. About 20 people are thought to remain trapped in the rubble.

The hotel, which opened in 2018 and had 80 rooms, was being used to house people in isolation over the coronavirus.

Latest on hotel collapse in east China’s Quanzhou: 49 rescued as of 08:20 am, March 8 (local time). Further rescue is under way https://t.co/eFN3AhHBYe pic.twitter.com/rP3Wgd15jt

02:00 GMT Hubei issues digital clean bills of health for people to get back to work

China’s Global Times is reporting that the province of Hubei, where the coronavirus first emerged late last year, has issued its first green digital health certificates – clean bills of health – that will allow people in the still sealed-off province to return to work.

Epicenter #Hubei issued its first batch of “green code” as digital health certificates for citizens to return to work amid the #epidemic, the code is applicable in every city in the province and citizens who got the certificates can then apply for vehicle permits pic.twitter.com/KDr6YSrNt1

Organisers of the Conservative Political Action Conference, or CPAC, said an attendee of its annual Washington-area conference last month has tested positive for coronavirus.

“A New Jersey hospital tested the person, and CDC [Centers for Disease Control] confirmed the positive result,” said a statement by the American Conservative Union, the host of the event.

The organiser said the affected person had “no interaction” with Trump or Pence and did not attend events in the conference’s main hall.

The conference took place from February 26 to 29.

An elderly man has died in a hospital in Sydney after being confirmed to have COVID-19.

He is the third person in the country to die after being diagnosed with the coronavirus.

Australia currently has 74 confirmed cases, but the authorities worry it is spreading within the community.

The masks are scheduled to arrive in Australia between now and the end of April, he added.

South Korea, the country grappling with the largest outbreak outside China, reported 93 new cases of coronavirus on Sunday morning.

While that was lower than the previous day, the authorities have said numbers could fluctuate as more people are tested.

South Korea now has 7,134 people with the virus. 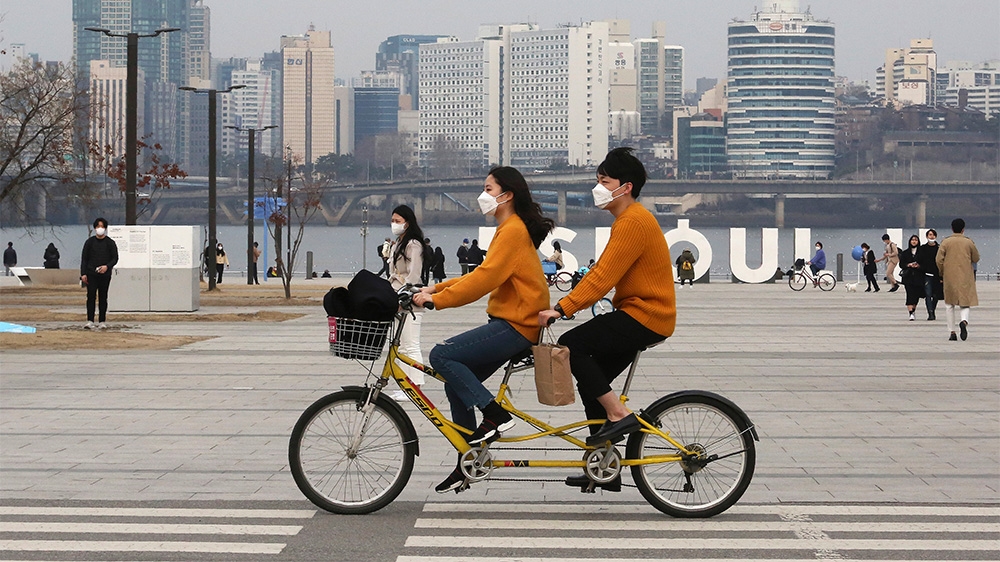 A couple wearing face masks rides a tandem bicycle around a park in Seoul on Saturday. More than 7,000 people in South Korea have been diagnosed with the virus. [Ahn Young-joon/AP Photo]

Bulgaria has reported its first cases of coronavirus in a 27-year-old man and 75-year-old woman.

Neither had travelled anywhere recently or been in contact with anyone who had returned from a country with a coronavirus outbreak, chief state health inspector Angel Kunchev told journalists in the early hours of Sunday morning.

“Samples from two patients – a man from the northern town of Pleven and a woman from the central town of Gabrovo – tested positive,” said Todor Kantardzhiev, the director of the National Center of Infectious and Parasitic Diseases.

Both had been hospitalised several days ago with severe respiratory problems.

Their condition has improved and both will undergo further tests overnight to verify the result.

Authorities said they had already tracked down and started testing around 40 people who were known to have been in contact with the two people.

Argentina has reported its first death from COVID-19, which is also the first in Latin America.

Paraguay, Colombia, Chile and Peru have announced their first confirmed cases of coronavirus in recent days, and several cases have been confirmed in neighbouring Brazil. 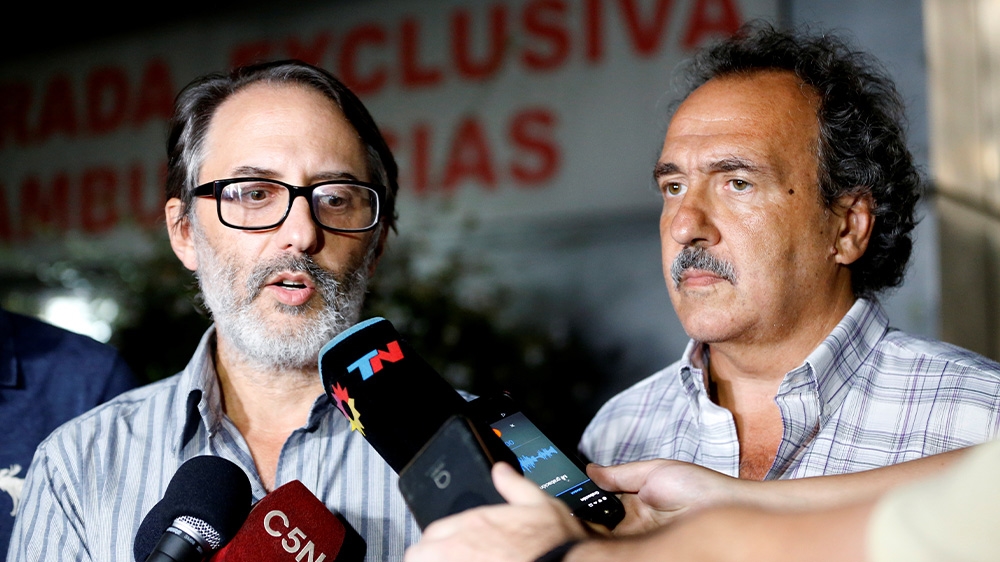 The spread of the coronavirus continues to slow in China, which has just announced its latest update.

The country reported 44 new cases on Saturday, most of them in Hubei where the outbreak originated. There were only three cases elsewhere on the mainland and those were imported from overseas.

New York governor Andrew Cuomo has declared a state of emergency over the coronavirus after the number of confirmed cases there rose by 13 to 89.

“It allows expedited purchasing and expedited hiring, which is what we need right now,” Cuomo told a news conference.

More than half of US states have now reported cases of the virus, which causes COVID-19. Two more people in the western state of Washington died from the disease on Saturday, bringing the total death toll across the country to 19. 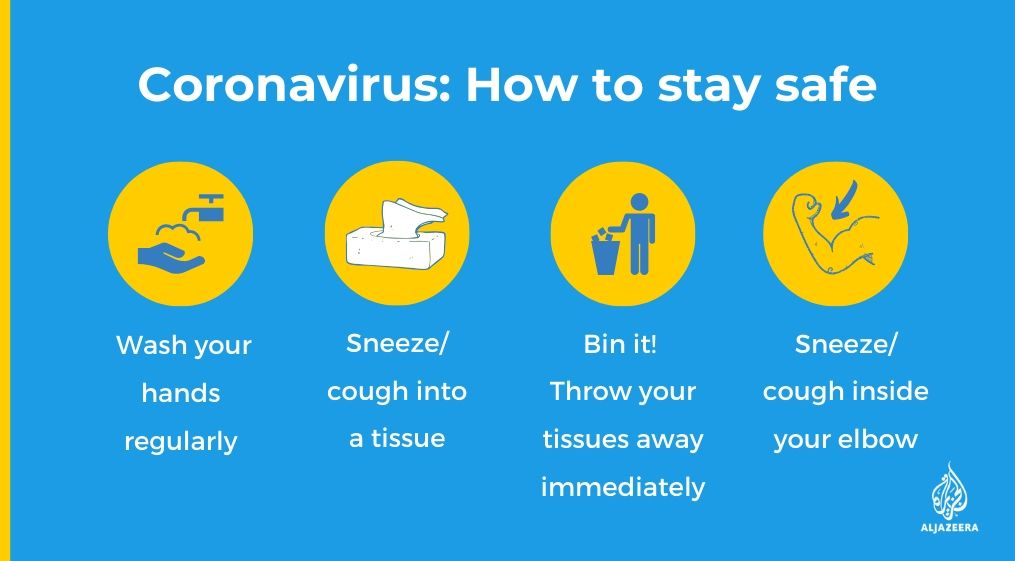 Italy is set to impose an unprecedented quarantine on the wealthy northern region of Lombardy, including Milan, as it steps up efforts to tackle the coronavirus.

According to a draft decree seen by Reuters, under the new rules, people will not be able to enter or leave Lombardy, which is home to some 10 million people, as well as 11 provinces in four of Italy‘s 19 other regions.

All museums, gyms, cultural centres, ski resorts and swimming pools will be closed in the targeted areas, according to the decree.

“The government is appealing to a sense of responsibility among all Italian citizens,” Sabina Castelfranco, an Italian journalist based in London, told Al Jazeera. “I think Italians are very concerned [about the virus].”

The governors of Lombardy and Emilia-Romagna, another region affected, have expressed reservations over the plan, so Prime Minister Giuseppe Conte has not yet signed it. That could happen on Sunday.

So far, only a few limited areas of northern Italy, known as “red zones”, have been quarantined.

Hello and welcome to Al Jazeera’s live updates on the coronavirus outbreak. I’m Kate Mayberry reporting from our bureau in Kuala Lumpur.

Click here to read all the updates from March 7.