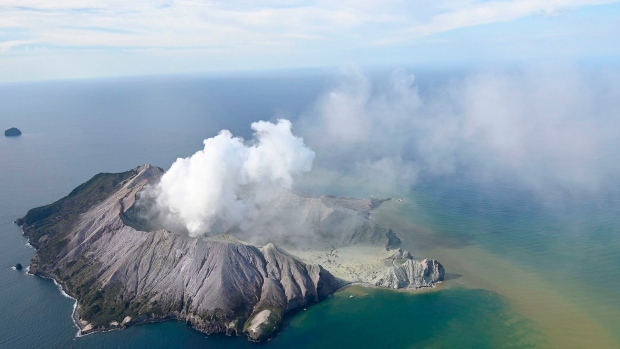 TORONTO —
The tragic deaths of six people after a volcanic eruption on an island off New Zealand has raised questions about the safety of other active volcanoes popular with tourists around the world.

Five people died at the time of the blast on Monday on White Island, also known by its indigenous Maori name Whakaari, while a sixth person died Tuesday night at an Auckland hospital.

Another eight people are believed to have died, with their bodies remaining on the ash-covered island.

There have been a number of deaths and close calls at other active volcanoes around the world in recent years.

Volcanologist and science journalist Robin George Andrews told CTV’s Your Morning that visiting an active volcano is a “calculated risk.”

“White Island is quite small so there aren’t many places to hide on it,” he said.

“Unfortunately this kind of blast is very short-lived, but it happens very quickly and it’s very energetic.

“They happen at volcanoes all around the world and when they do happen there is pretty much nothing anyone can do if they are already there. They’re the most unpredictable kinds of eruptions.

“The best way to prepare if you’re visiting any sort of active volcano is to learn as much as you can about the risks involved. And understand that there’s actually a lot of uncertainty.”

Andrews explained that there was a similar eruption on White Island in 2016, but it was at night when no tourists were nearby.

“Personally it would be a shame if people weren’t allowed to go and see active volcanoes because they are literally where new land is created, they are responsible for so much and they mean so much to so many people on a social, spiritual and economic level,” he said.

“They’re just beautiful and for most of their lifetime they’re harmless. For each volcano, as long as people are quite conservative of how close people are allowed to get I feel like people should still be allowed see them.

“Unfortunately in some situations tragedies will happen. It’s a calculated risk, even getting in a car to get to work there is a risk. It’s about what level of risk each person is willing to take to see more of the natural world around us.”

There are about 1,500 potentially active volcanoes worldwide, according to the U.S. Geological Survey. Many of these are located along the Pacific Rim in what is known as the “Ring of Fire,” an arc of volcanoes and fault lines encircling the Pacific Basin.

Canada has five potentially active volcanic areas, all of which are in British Columbia and Yukon. The region may be volcanically quiet for centuries or even millennia, but these volcanic areas all have the potential for future eruptions, according to the government of Canada.

“Often when alert levels are raised around volcanoes around the world there isn’t an eruption, it’s more just a precautionary measure,” Andrews said.

“The chain reaction that causes this to violently depressurize (at White Island) happens so quickly, within a heartbeat almost, really there’s nothing you can do to know it’s coming or get out of the way.”

Dozens of active volcanoes are accessible to the public to view up close. Etna, Europe’s highest and most active volcano, spewed ash and lava as recently as June.

The UNESCO World Heritage site is closely monitored and accessible from the Sicilian city of Catania.

The huge volcano is sometimes referred to as the “roof of Europe” Andrews said, and its eruptions have destroyed villages in the past.

A BBC film crew had a very close call there in 2017 when a lava flow mixed with steam caused a huge explosion, which pelted the group with boiling rocks and steam.

America’s first national park sits on an active supervolcano. It last erupted more than 640,000 years ago, but is unlikely to erupt in the next few hundred years, according to the U.S. National Parks Service.

The most recent monitoring data shows no significant changes in volcanic activity in November.

An eruption by Mount Vesuvius in Italy buried the ancient Roman city of Pompeii in 79AD. It last erupted “quite explosively,” according to Andrews, in 1944. Another active volcano in Italy, Mount Stromboli on the island of Sicily, erupted “very suddenly” Andrews said, in 2019 killing a hiker and sending tourists jumping into the sea for safety. Climbers can access the volcano unescorted.

An eruption at Indonesia’s Mount Sinabung in February last year shot ash five kilometres high and blew away much of the mountain’s summit.

Mount Sinabung is among more than 120 active volcanoes in Indonesia, which is prone to seismic upheaval due to its location on the Pacific “Ring of Fire.” Around 300,000 people make the ascent up Mount Fuji every year, according to Lonely Planet.

“During the climbing season routes are packed, and its barren, apocalyptic-looking landscape is a world away from Fuji’s beauty when viewed from afar,” the guide-book company said.

“At the summit, the crater has a circumference of 4km, but be prepared for it to be clouded over.”

– With files from The Associated Press