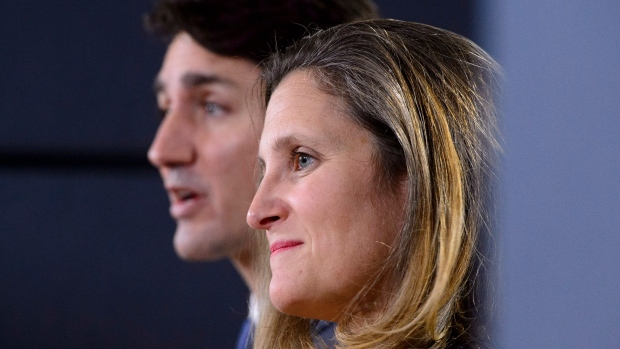 
OTTAWA —
Justin Trudeau and Chrystia Freeland are to meet a top Mexican diplomat in Ottawa today as efforts intensify to get the new North American free-trade agreement approved.

All three countries have signed the United States-Mexico-Canada Agreement but it has to be ratified by their legislatures before it takes effect and so far only Mexico has made that step.

The deal is stalled in the U.S., where Democrats in Congress have been pushing for stricter enforcement measures for its labour and environmental standards.

Most of the trouble is between the United States and Mexico but Canada can play a role in smoothing things out, such as by helping Mexico adopt Canadian-style systems for certifying unions.

American officials had talked about finalizing a deal by U.S. Thanksgiving, which was yesterday.

This report by The Canadian Press was first published Nov. 29, 2019.