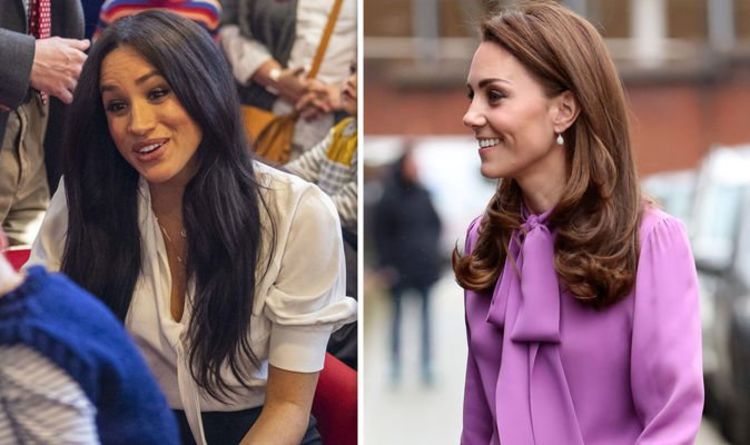 
The Duchess of Cambridge and the Duchess of Sussex have both stepped out wearing pussybows. They were a favourite of Diana’s, who wore one for pictures to mark her engagement to Prince Charles in 1981.

Stylist Susie Hasler told the Daily Mail the item is a “big thing for this season”.

She added: “Kate is traditional and feminine with the clothes she wears – that’s why she has her bow tied up.

“Because of her place in the royal family, she always opts for clothes that are much more formal and conservative.

“Meghan’s style is much more relaxed. Her clothes are more tailored, with a masculine edge. She doesn’t really go for super feminine cuts.”

Kate donned a red dress with a pussybow when she and Prince William met Mary Berry for the BBC show A Berry Royal Christmas, which airs later this month.

Meanwhile, Meghan wore a white pussybow blouse, which was undone, during a visit to Broom Farm Community Centre in Windsor in November.

And Kate stunned in a purple blouse featuring the neck tie when she visited the Henry Fawcett Children’s Centre in March.

It comes after fashion expert Anthony McGrath claimed Meghan and Kate’s choices are inspired by Diana.

He said: “As one the most-loved style icons of the 80s, it’s not surprising that Princess Diana’s fashion sense has provided the Duchesses of Sussex and of Cambridge ample sartorial inspiration.

“While I do think the Duchess’s choices are to do with fashion, I also think some of their choices are intentionally paying respect to their late mother-in-law.”

In November, Meghan was named as the most powerful dresser of 2019 by global fashion search website Lyst.

On average her outfits sparked a 216 percent increase in searches for similar items, according to Lyst.

Kate was in 11th place in the list of fashion influencers.