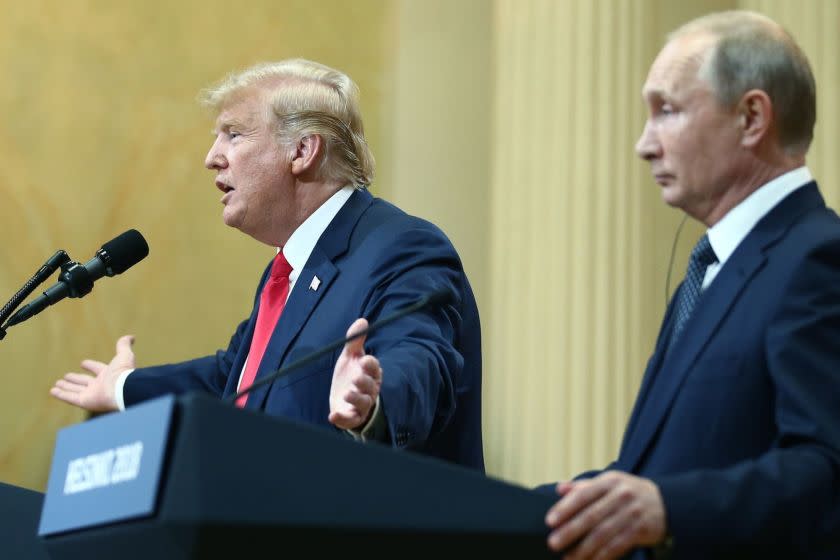 To the editor: We confront a moral and constitutional crisis unlike anything I have seen in my 73 years. President Trump’s actions with regard to Russia are exponentially more dangerous than Watergate or President Bill Clinton lying about sex.

We must believe our own eyes, and they are showing us that our president is a traitor to the fundamental principles of American democracy and may even be a traitor to the country. He has facilitated an ongoing attack on our republic, most recently by doing nothing in response to the horrifying scheme by Russia to have American soldiers killed in Afghanistan.

Trump’s actions speak for themselves: He could be one of the greatest traitors in the history of our country.

To the editor: Republicans, please don’t be silent to the families who lost loved ones in Afghanistan recently. Please don’t wander hunched over with a downtrodden face as you try to hide your shameful reticence from reporters. Do not seal your lips out of fealty to the president when American lives are at stake.

Why not investigate and explore, demand to discover the truth, and check out the possibility that this could be much worse than Benghazi?

Your silence is so far from golden. Let’s see what you are made of. We are waiting. We are watching. The clock is quickly ticking toward Nov. 3. We will see what kind of men or women you are and cast our votes for only the honorable and decent among you.

To the editor: How long has Trump known about Russia putting bounties on American soldiers? Has he given a discernible response? Or will his “pattern of submissive behavior” toward Vladimir Putin continue when American soldiers are killed by militants paid by Russia?

Americans have to face the horrifying possibility that our leader is being blackmailed by Russia. Every interaction Trump has with Putin is shaded by the Helsinki tableau: the smug, grinning Putin, and a shaken Trump.

The only factor possibly holding back Putin from displaying outright dominance at this point is the impending U.S. election. It is not too excessive to say that the balance of international power will be tipped by the results of our election.

To the editor: I guess everybody has forgotten that the U.S. secretly provided about $3 billion to aid the mujahideen (or freedom fighters) in Afghanistan for their war against the Soviets in the 1980s. When the Reagan administration sent Stinger missile launchers, the occupation of Afghanistan became a deadly quagmire, with Soviet helicopters being destroyed at a crippling rate.

All in all, thousands of Soviet soldiers were killed with the aid of U.S. arms. And yes, you can look at that as payback for Soviet aid to North Vietnam.

By the end of 1993, Afghanistan was basically a destroyed country, and the Taliban and Osama bin Laden filled the vacuum. Just think: Had we stayed out of this, perhaps Russian soldiers would still be in Afghanistan and there would have been no 9/11.