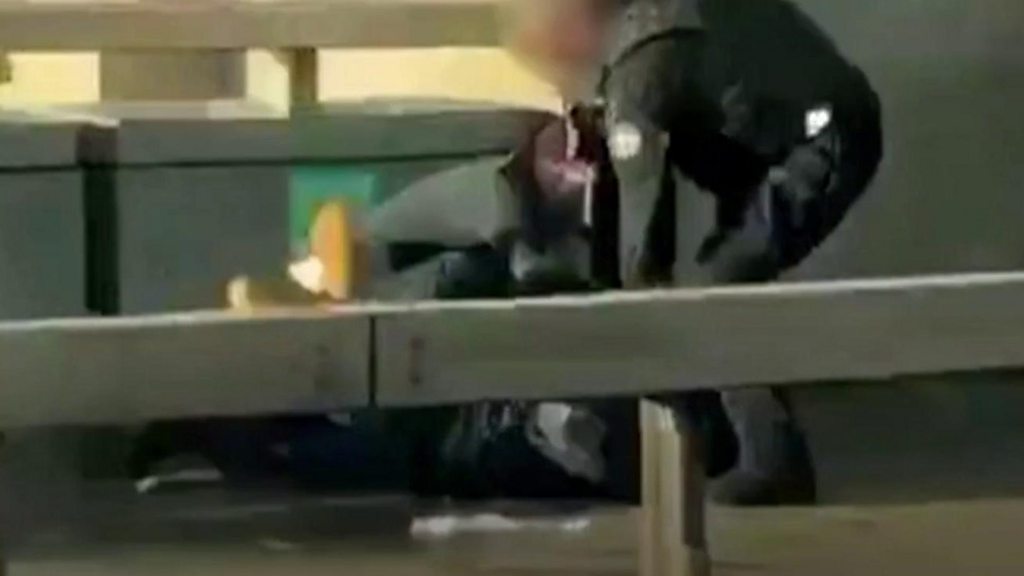 Two members of the public have died and a number of others were stabbed in an attack on London Bridge which is being treated as “terror-related”.

The suspect was shot dead at the scene.

The Met Police said officers were called to a stabbing at a premises near the bridge in central London just before 14:00 GMT.

Two members of the public are dead while three others were injured and taken to two London hospitals.

Videos on social media show people wrestling a man to the floor who then disperse before he is shot by an armed police officer.

Another man in a suit and jacket can be seen running from the suspect, having apparently retrieved a large knife.

A separate video has also emerged showing police officers aiming guns at a white lorry that jack-knifed across the bridge.

The footage shows several officers surrounding the vehicle before moving to the rear to check its container.

Whitehall officials have told BBC Security Correspondent Frank Gardner the police action was not intelligence-led and was spontaneous and reactive.

What have police said?

Met Police assistant commissioner Neil Basu said the suspect was shot by armed officers and died at the scene.

He confirmed the force was treating it as a terrorist incident.

Police said officers were at the scene within five minutes of being alerted.

The man had a hoax explosive device strapped to his body, said Mr Basu who is the head of UK counter-terrorism policing.

London Ambulance Service declared a “major incident” and had a number of crews at the scene.

“A number of other people received injuries. As soon as we can provide updates on their condition we will,” Mr Basu said.

There is no further danger to the public, he added.

Met Police Commissioner Cressida Dick said: “We are also working at full tilt to understand exactly what has happened and whether anyone else was involved.”

A wide police cordon will remain in the area for some time as police carry out searches “to ensure there is no further threat”.

Where did it happen?

The stabbing happened on the north side of London Bridge, next to Fishmongers’ Hall and opposite Adelaide House.

London Bridge station was closed during the incident, but has since reopened.

A number of buildings near the bridge, including King’s College London and the News UK building opposite the Shard, were put into lockdown as part of the evacuation of the area.

A wide police cordon remains in the area as police carry out searches “to ensure there is no further threat”.

Residents who live nearby have been told to find elsewhere to stay and the cordon may remain in place over the weekend, police said.

What did witnesses see?

BBC reporter John McManus said he saw a group of men involved in a fight on the bridge. Police then arrived and shots were fired, he said.

Witnesses described armed police arriving at the scene and shooting a man. Others said they saw a man on the ground, holding a knife.

Amanda Hunter said she was on a bus on the bridge when she looked out the window and saw “three police officers going over to a man”.

“Then one of the police officers shot him,” she said. “It appeared there was something in his hand.”

Bus driver Mustafa Salih was travelling from Borough High Street towards London Bridge where he saw emergency vehicles and the police cordon.

“A police officer came up to me and said turn off your engine, get off and run,” he told BBC London.

“I looked up and I could see a crowd of people coming towards me.

“One woman was crying. I ran back down to Borough High Street. It was all very scary as we did not know what was happening.”

Luke Redman said he heard “12 or 15 (gunshots) in about 10 seconds” as he left the Monument pub and ran down an alleyway to escape.