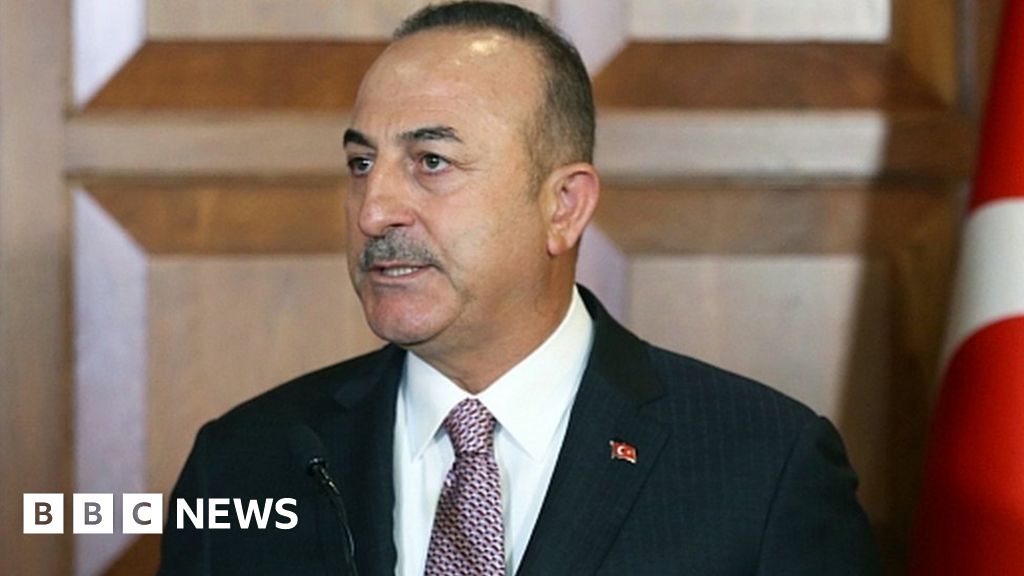 Mevlut Cavusoglu told reporters that Mr Macron wanted to be the leader of Europe but was “wobbling”.

Turkey views a section of the group – the YPG – as terrorists.

Earlier on Thursday, Mr Macron said he stood by comments made three weeks ago when he described Nato as “brain dead”.

He said members of the alliance needed a “wake-up call” as they were no longer co-operating on a range of key issues.

He also criticised Nato’s failure to respond to the offensive by Turkey – a Nato member – in northern Syria.

What did Cavusoglu say?

“Right now, there is a void in Europe, [Macron] is trying to be its leader, but leadership comes naturally.”

Mr Macron’s office said the meeting was to express France’s solidarity with the SDF in its fight against the Islamic State group and also to reiterate concerns about the prospect of a Turkish military operation in Syria.

A day later, Turkey launched an offensive in northern Syria to create a “safe zone” cleared of Kurdish militias.

Ties between Turkey and its Nato allies have been under strain since Ankara bought the advanced Russian S-400 surface-to-air missile system earlier this year.

What did the French president say?

Mr Macron was speaking at a news conference with Nato Secretary General Jens Stoltenberg, a week before alliance leaders meet in the UK for its 70th anniversary.

In a 7 November interview, Mr Macron stressed what he saw as a waning commitment to the transatlantic alliance by its main guarantor, the US. Allies said at the time they disagreed with his assessment.

“I totally stand by raising these ambiguities because I believe it was irresponsible of us to keep talking about financial and technical matters given the stakes we currently face,” he said on Thursday.

“A wake-up call was necessary. I’m glad it was delivered, and I’m glad everyone now thinks we should rather think about our strategic goals.”

On Turkey, he said he respected its security interests after it suffered “many terrorist attacks on its soil”.

But he added: “One cannot on one hand say that we are allies, and with respect to this demand our solidarity; and on the other hand, put its allies in the face of a military offensive done as a ‘fait accompli’, which endangers the action of the coalition against Islamic State, which Nato is part of.”

Mr Macron said Nato needed to clarify who or what the alliance stood against, adding that he disagreed that Russia or China were the enemies.

Scene is set for Nato summit

President Macron is not one for backing down and he insists that his criticism of Nato has had an impact.

This was “a wake-up call” to the alliance he said. It needed to stop solely talking about money – who spends what – and turn to crucial issues like the purpose and goals of the organisation. In his view his remarks have done Nato a service.

His condemnation of some governments’ unilateral decision-making – a reference to Washington’s precipitate pull-back in north eastern Syria and the accompanying Turkish military operation there – suggests that next week’s brief Nato summit, outside London, should be an interesting one.

With this gathering very much in mind, the Nato Secretary General has announced a new division of the contributions each ally makes towards Nato’s central budget. The US will pay less and Germany will pay more. The hope is that this will encourage Mr Trump to moderate his usual tirade against his European allies. Watch this space.

What’s the issue with Nato?

President Donald Trump’s abrupt decision to pull most US forces out of north-eastern Syria in October took European Nato members by surprise.

The move opened the way for Turkey to push into Syria and create what it termed a security zone along its border. Kurdish forces, who had been helping the US fight the Islamic State (IS) group, were expelled from the area.

Mr Trump has frequently accused European Nato members of failing to provide their fair share of military spending and for relying too heavily on the US for their defence.