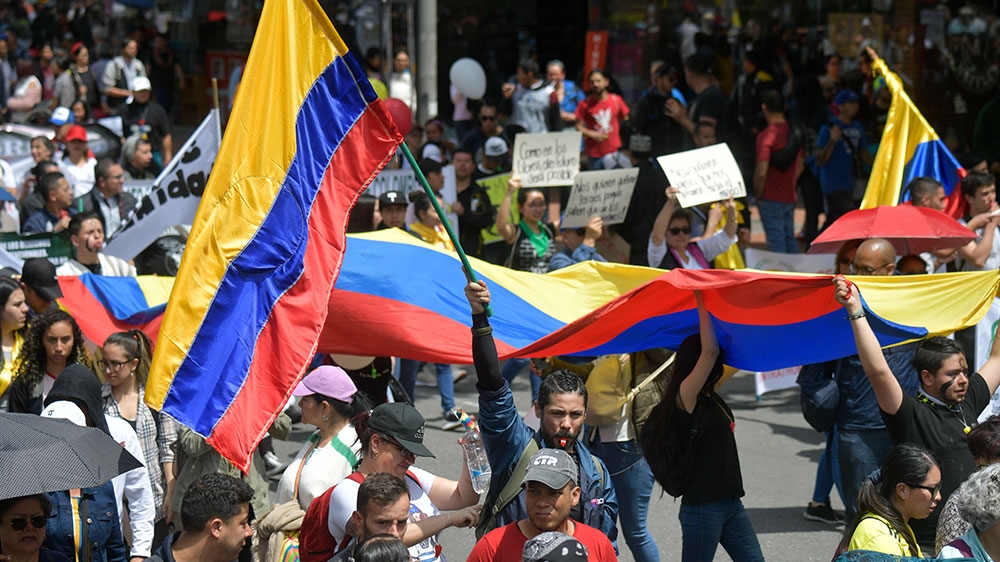 Bogota, Colombia – Colombians awoke on Friday energised by the mass anti-government protests of the day before and eager to see how a tense national situation would develop.

Isolated clashes with police continued through Friday morning, according to local media. The organisers of Thursday’s rallies, which drew hundreds of thousands in Colombia’s largest protests in recent memory, called for a repeat on Monday.

But Colombian President Ivan Duque declined to offer any concessions in a late-night address on Thursday, leaving unanswered the looming question of whether Colombia will join its South American neighbours in prolonged social unrest to affect change in the government.

The demonstrations, energised by recent examples in Ecuador, Chile and Bolivia, brought the president and his ruling party to by far their weakest point of his 15 months in office. 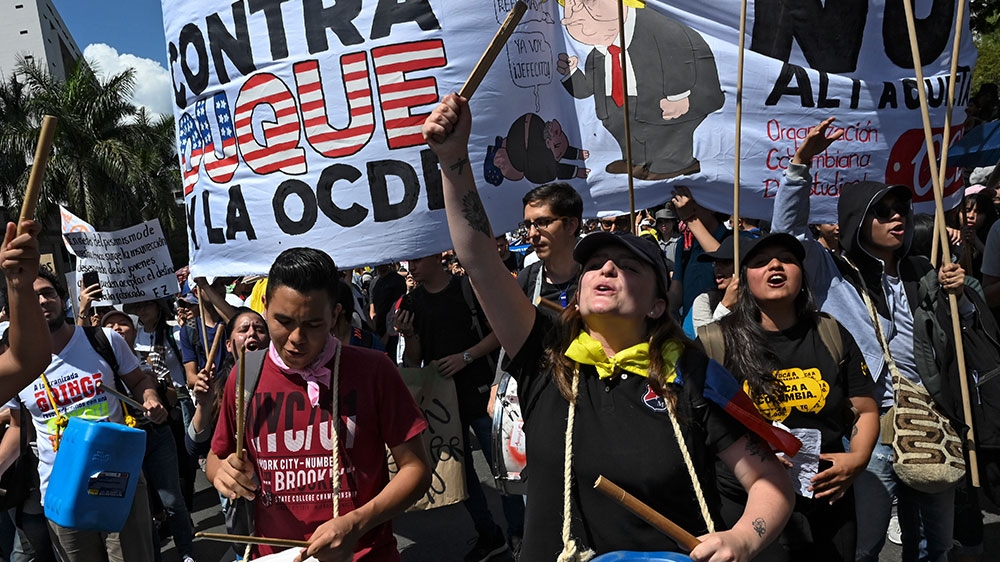 People march during a nationwide strike called by students, unions and indigenous groups to protest against the government of Colombia’s President Ivan Duque in Medellin, Colombia [Joaquin Sarmiento/AFP]

“Colombia, at this point, has two options,” said Sandra Borda, a professor of political science at Los Andes University in Bogota.

In one, she said, the government continues to hold the policy lines it has clung to stubbornly throughout falling popularity, as Duque seemed to indicate in his Thursday address to the nation. In that case, protests seem likely to continue, she said, towards deadlock and confrontation.

The other option, Borda said, is for the government to open negotiations and assimilate big changes into its agenda.

“It’s a grave problem for the government because it is politically very weak and will negotiate with very emboldened social leadership,” Borda said. “Surely they will have to make a lot of concessions.”

But she said chatter on the morning news talk shows had surprised her when some hardline voices from the right said that the wave of protests in Latin America and Colombia needed to be taken seriously.

Colombia’s protests did not issue a simple list of demands that could easily be met. Instead, indignant people gathered from nearly all sectors of society with qualms ranging from recently proposed labour reform to an uptick in the number of killings indigenous and social leaders to structural problems and corruption that have been part of Colombia for generations. That leaves Duque with no easy response, analysts say.

“Since the grievances and demands of people were so wide, there’s no single issue where [Duque] can just make rapid concessions,” said Camila Hernandez, Colombia programme assistant at the Adrienne Arsht Latin America Center in Washington, DC. “I think we have to wait and see what he priorities.”

Protester demands ranged from a crackdown on corruption that drains Colombian institutions to commitments to ambitious rural development goals. Some decried a government that seemed to favour big money interests over popular welfare, or its apparent helplessness before a two-year spate of assassinations of community leaders. Others wanted to see improvements to health and education.

“Instability might come if nothing changes as a result of this protest,” Hernandez said. 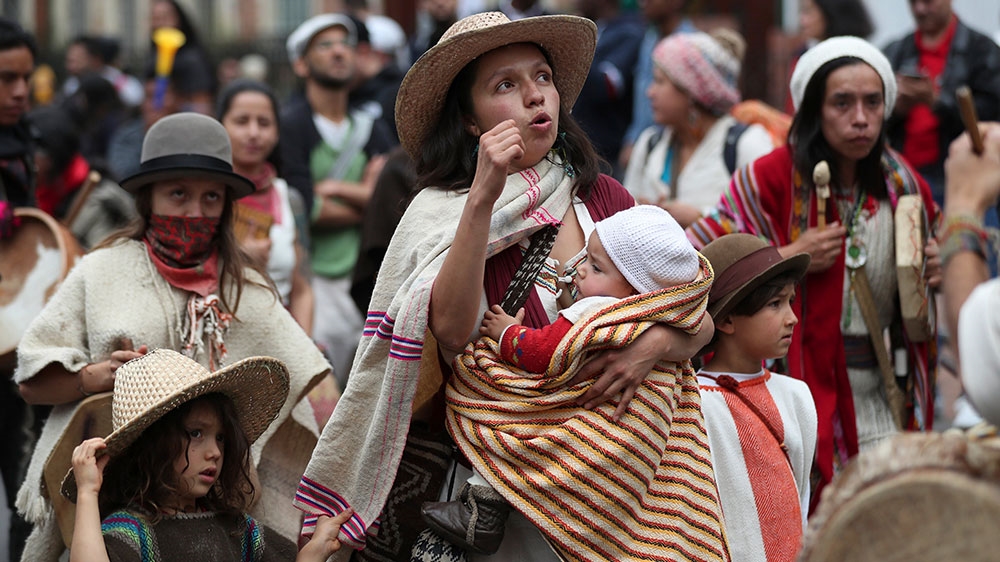 A woman marches with her children in an anti-government demonstration in Bogota, Colombia [Fernando Vergara/AP Photo]

Duque’s record in office suggests a slim chance of compromise with the opposition. In his address on Thursday night, he focused more on condemning the night’s violence than on promising progress on the issues raised. Doing so, the president fed a common complaint that he relies too often on military and police over economic or social programmes.

“He basically said, ‘I heard you but I don’t care, I care about security,'” said Sergio Guzman, director Colombia Risk Analysis in Bogota. “He basically brushed off the dozens of reasons that made people go out in the streets.” 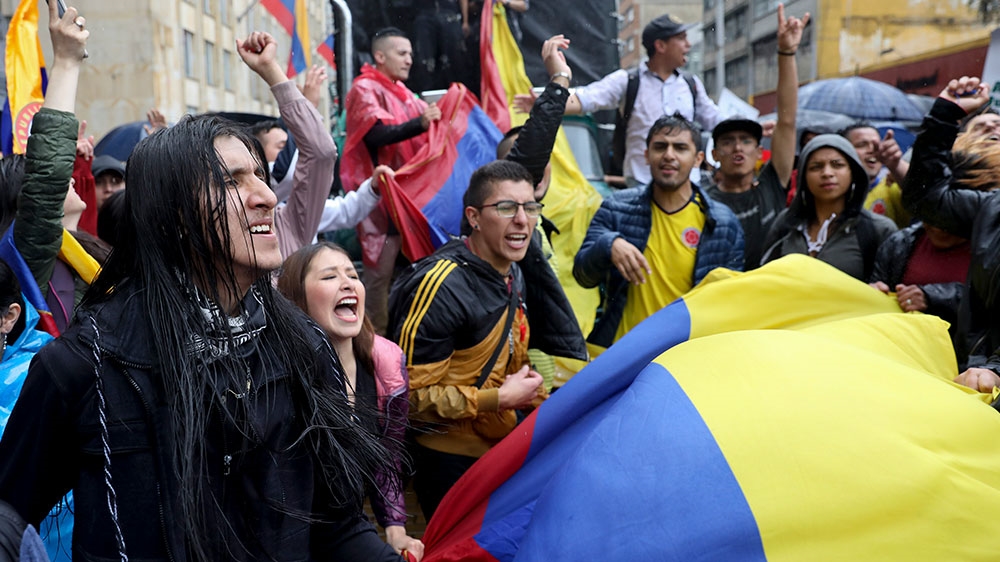 Small protests continued through Friday in Bogota, with more scheduled for the evening. Officials said that at least three died in the unrest that followed Thursday’s largely peaceful strike.

The organisers of Thursday’s protests pledged to meet on Monday to plan further action.

One Colombian, 31-year-old telephone worker Edgar Barrero, walked on a city street of Bogota and said he was headed for more protests in the city centre.

He said protesters in other South American countries have encouraged Colombians to push harder against the government for their demands. He said he hoped marches continued in days ahead.

“The resistance will continue,” he said as he walked towards his second day of protest.