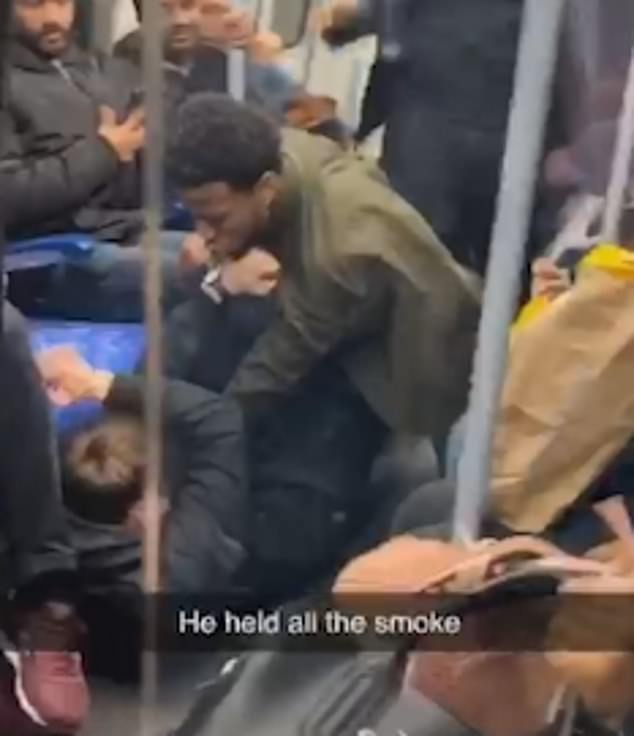 By Bhvishya Patel For Mailonline

Passengers were left staring in horror after a fight erupted between two enraged commuters on a London Underground train on New Year’s Day.

The dramatic footage, which was filmed by commuter Quinton Knight 19, from London, shows an intoxicated man exchange words with a fellow passenger before a brawl breaks out on the Jubilee line train near North Greenwich station at around 2am.

The drunk man, who appears to shout at another passenger wearing a khaki jacket, is then pushed to the ground and repeatedly punched in the face by the furious commuter as horrified commuters watch on.

Following the fight, Mr Knight said the man in the khaki jacket got off at West Ham station while the intoxicated man remained on the train.

The fight, which was filmed by Quinton Knight, 19, from London, shows a man repeatedly punch another commuter in the face on a Jubilee Line train near North Greenwich on New Year’s Day 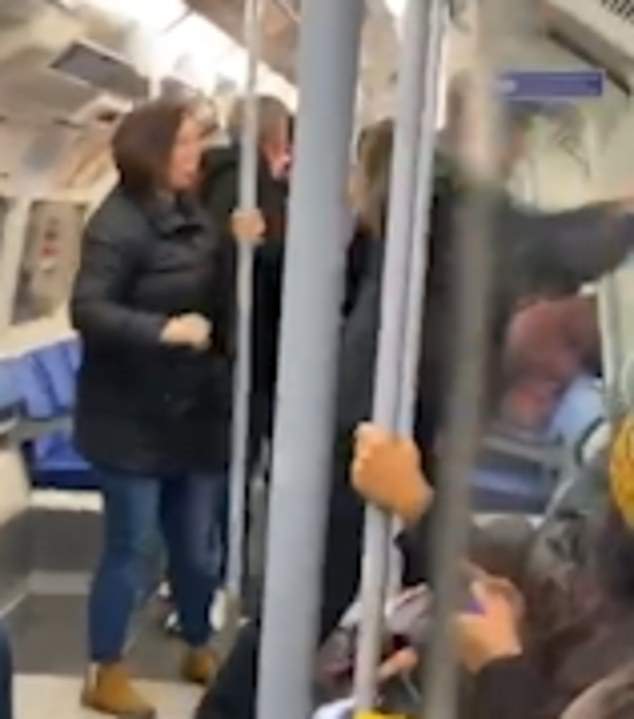 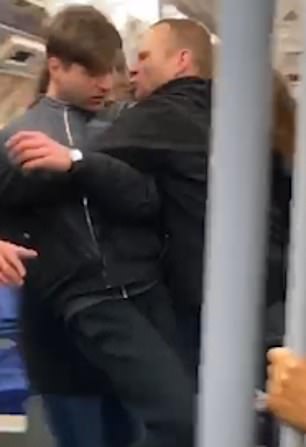 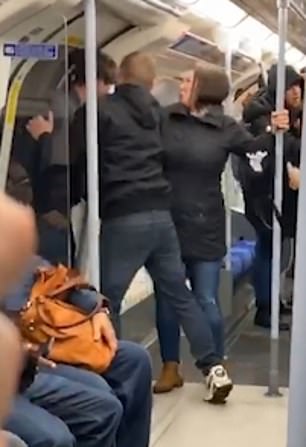 The intoxicated man is held back by his friend, who tries to keep him steady, and pushed against the carriage doors

During the video, the intoxicated man appears to exchange heated words with another passenger in the distance before punching the doors of the train carriage.

He then lunges forward but is held back by his friend who pushes him against the carriage doors and tries to keep him steady.

As the commotion continues, the drunk man pushes through the commuters holding him back and appears to lunge towards another commuter onboard the train.

The furious passenger, donning a khaki jacket, violently pushes the intoxicated man onto the floor and delivers a series of blows to his head as horrified commuters watch on in shock.

The angry passenger is eventually pulled off the drunk man who lies on the floor shielding his head before his friends pull him off the ground.

Mr Knight, who recorded the fight from the side of the carriage, said there was a ‘lot of panic’ as the fight broke out between the two men.

He said: ‘There was quite a lot of panic. It began across the other side of the carriage and ended up right in front of me.

‘The train was packed and there was quite a lot of commotion. It caused large panic and the other passengers were scared.

‘When the fight ended the atmosphere was quite tense. It was tense for a few moments.’ 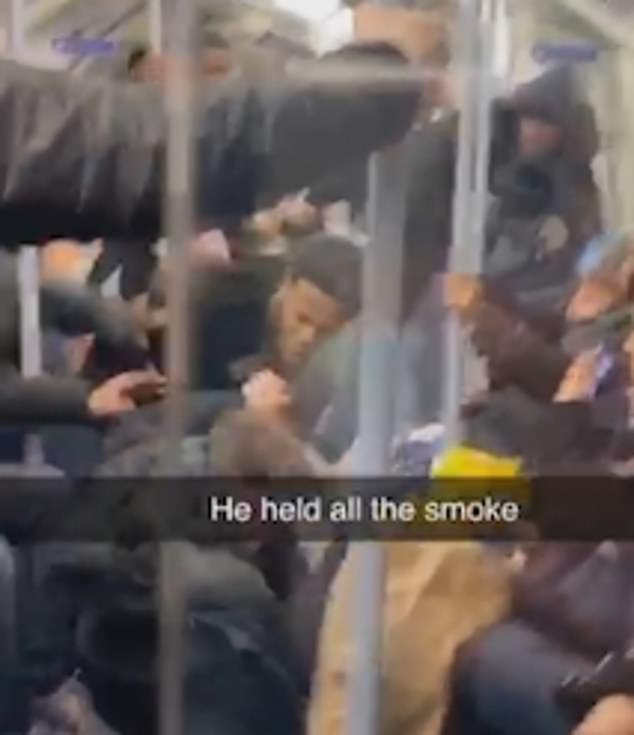 Moments later, a man wearing a khaki jacket pushes through fellow commuters and brings the drunk man to the floor 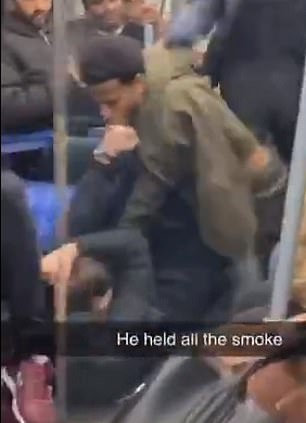 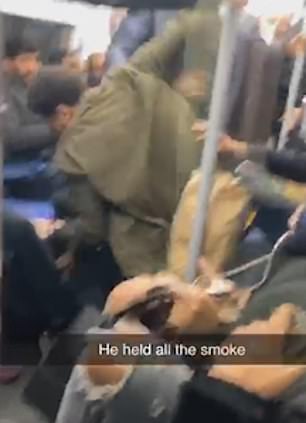 While it is unclear what exactly started the fight, Mr Knight said the situation came about after the drunk man and his friends got on the train and bumped into the man with the khaki coat.

Mr Knight continued: ‘The situation arose when several drunk men got on the train and they were swinging on the central pole.

‘They bumped into the man in the green coat and then the drunk man exchanged a few words with him. I couldn’t hear what they said.

‘The drunk person came close to his face and pushed the man in the green coat.

‘Moments before the clip I filmed both men were going at it but passengers were holding them apart.

‘Some passengers seemed to know the drunk man. 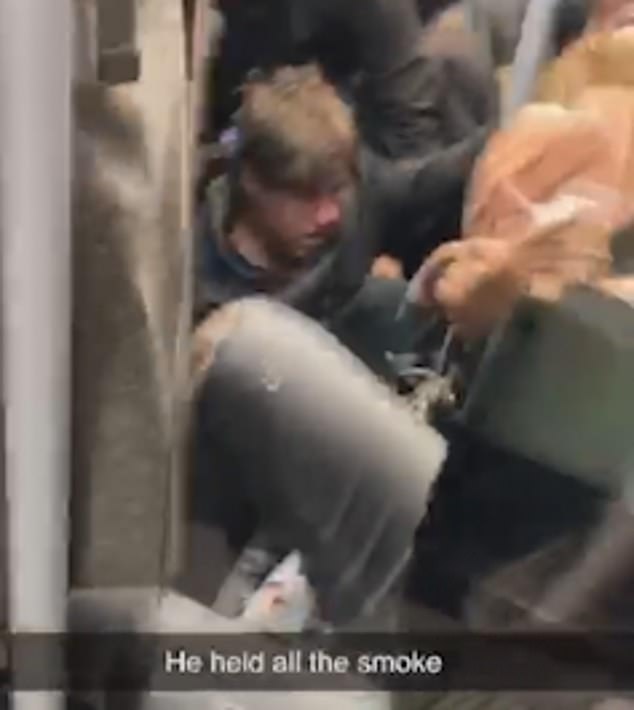 ‘The man in the green coat exited the train at West Ham but the drunk man didn’t leave. He stayed on the train until Stratford I think.’

A British Transport Police spokesman said: ‘We are aware of footage which captures the moment a fight erupts on board a London Underground train.

‘We are currently reviewing this footage and would ask anyone with information to contact BTP, you can do this by sending a text to 61016 or by calling 0800 40 50 40.’