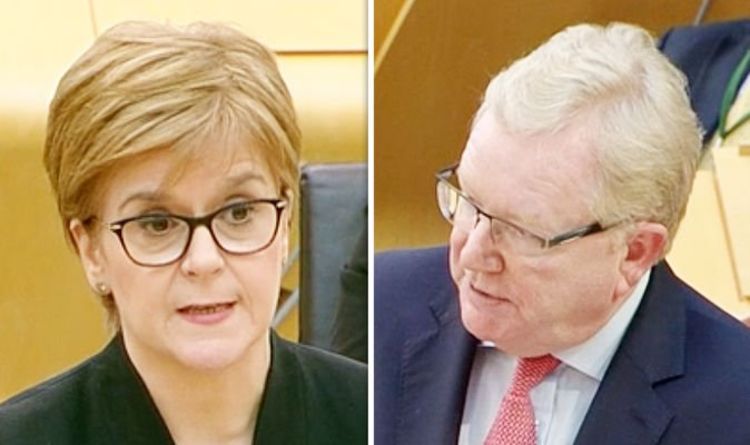 
Nicola Sturgeon hoped to end talks on David Mackay’s resignation with the announcement the former SNP Finance Mister has been suspended from the party after the publication of series of scandalous texts to a schoolboy. The Scottish First Minister branded as “unacceptable” the behaviour of Mr Mackay but her response to the scandal only prompted further questioning from the leaders of opposition parties. Interim Scottish Tories leader Jackson Carlaw said: “I had fully intended to ask questions on other matters this morning but the First Minister’s short statement does require questions by way of follow up.

“First Minister, given the evidence of the texts now in the public domain, what does the First Minister believe the behaviour of her former Finance Secretary does for the reputation of her Government, this Parliament and Scottish Politics generally?

“As Mr Mackay has 26,000 followers on Twitter alone, many parents will be concerned over what assurances the First Minister has received that this is the only example of his unacceptable behaviour and whether she believes any reassurance received are credible?

“And given that the victim is a 16-year-old-boy and I’ve heard no mention of his welfare, what contact has either the SNP or the First Minister’s office had or will be having with him or with his family at any point and what support has been offered?”

Ms Sturgeon said she had not been made aware of any further example of misconduct from Mr Mackay and had only been informed about the text exchanges between the SNP politician and the schoolboy on Wednesday evening.