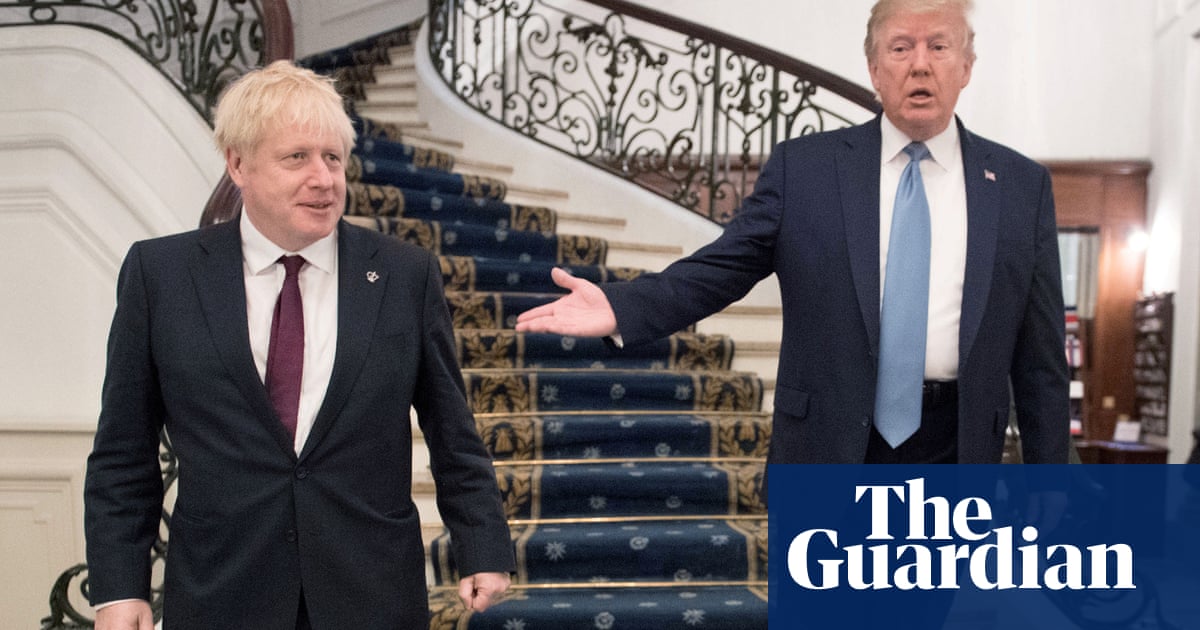 
Boris Johnson will seek to downplay his relationship with president Donald Trump at this week’s Nato meeting, amid Labour’s accusations that a US-UK trade deal will lead to an NHS sell-off and higher drug prices for Britons.

As the US president flew into London on Monday night, Conservative strategists were hoping Trump would not add fuel to accusations that the US will seek to profit from the NHS as the price for any trade deal.

Johnson has made clear that he would not welcome any input from Trump into the election debate at such a sensitive time in the campaign, after the US president offered him his endorsement over the summer.

There is nervousness within the Conservative campaign about Trump’s unpredictability, as he has a full two days in the UK and is expected to give a press conference on Wednesday. Johnson said last week that “close friends and allies” like the UK and the US should not get involved in each other elections.

As Trump landed on Monday night, Jeremy Corbyn wrote to the US president demanding assurances that any trade deal would exclude any reference to pharmaceuticals and accept the role of the UK’s drugs watchdog in setting the threshold for the cost-effectiveness of drugs for the NHS.

He also requested that the US drop the demand for “total market access” to UK public services and rule out any investor-state dispute settlement mechanism by which the UK government could be sued for protecting public services.

Corbyn also wrote to the prime minister, urging him to break off trade talks with Trump until any reference to pharmaceuticals is struck out of Washington’s negotiating objectives.

The Labour leader has repeatedly accused Johnson of preparing to sell off the NHS, and Labour activists at recent rallies have taken up a chorus of “Not for sale! Not for sale!”

Nicola Sturgeon, the SNP leader, also highlighted Trump’s previous claims that foreign “freeloaders” are paying too low a price for US medicines and instructions to his chief trade negotiator to make drug prices a “top priority” in any talks with trade partners. Matt Hancock, the health secretary, accused the opposition of scaremongering, denying the NHS would be up for sale.

“Once again, Jeremy Corbyn is desperately trying to whip up absurd scare stories about our NHS to distract from his confused position on Brexit and plans for two referendums,” he said.

Johnson is yet to have fixed a bilateral meeting with Trump in his diary but he may still meet the US president one-to-one on Wednesday.

On Tuesday, he will host a reception in Downing Street for the Nato leaders and attend a separate event at Buckingham Palace, where Corbyn will also be present.

The Nato meeting is expected to be dominated by tensions within the alliance over the conflict in Syria and Turkey’s incursion into Kurdish-held areas.

The leaders’ meeting, hosted by Johnson just outside Watford, was called to mark the alliance’s 70th anniversary.

However, the celebrations are likely to be overshadowed by French president Emmanuel Macron’s accusation that Nato was “brain dead” for failing to stop Turkey’s attack on Kurds.

Recep Tayyip Erdoğan, the Turkish president, accused Macron of having “a sick and shallow understanding” of terrorism, suggesting he was the one who was “brain dead”.

Johnson will host the two leaders, together with the German chancellor, Angela Merkel, for talks in Downing Street on Tuesday ahead of the main gathering on Wednesday, when the 29 world leaders are expected to give speeches and discuss Nato missions, member states’ spending and Nato’s role in responding to threats around the world.

The prime minister’s official spokesman said: “The PM’s position is that Nato is the most enduring and successful alliance in military history and that it continues to adapt to the evolving threats that we face.

“It is the cornerstone of Euro-Atlantic security and it helps to keep a billion people safe. The PM will emphasise that all members must be united behind shared priorities so Nato can adapt to the challenges ahead.”