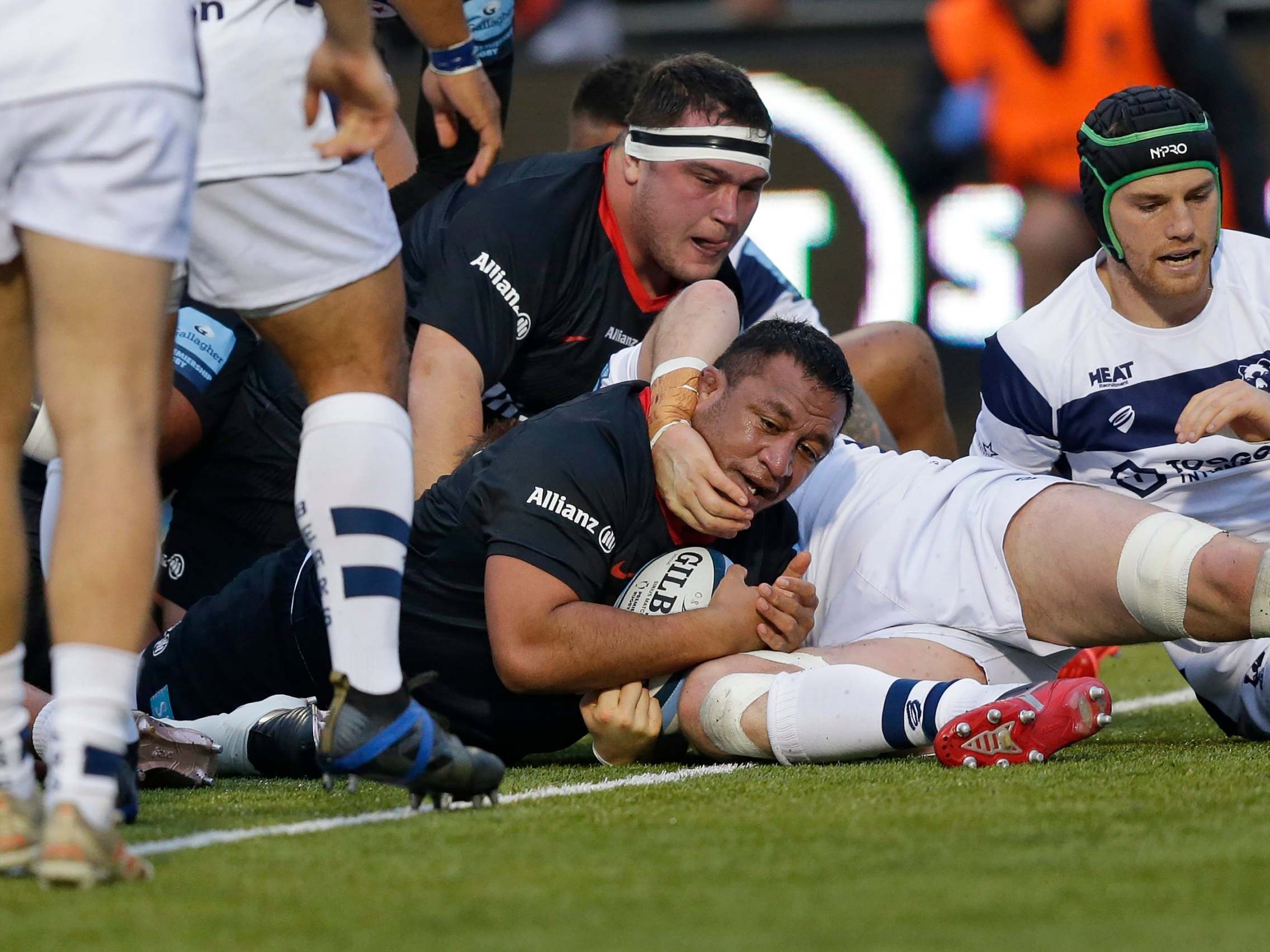 Follow the latest updates live from the Premiership clash between Saracens and Bristol Bears at Allianz Park.

In what has been a tumultuous season at Saracens already, the reigning Premiership champions face one of the most-improved teams this season in the shape of Pat Lam’s Bristol looking to claw back further ground on the pack following their 35-point deduction for breaching the salary cap.

But Bristol, flying high in second place, could go top of the table with a victory and will plan on causing a major upset at Allianz Park to not only continue their strong start to the season but send out a major statement of their title credentials. Follow the live updates below.

This period of being down to 14 has really hurt Bristol. Again Saracens flood through with the attack, and the ball is worked out wide right to Maitland in space. He’s trapped short of the line but they recycle possession and Wigglesworth goes to the narrow side to Brad Barritt, who burrows low and drives over the line to score. Farrell adds the conversion before heading off along with Billy Vunipola and Maitland, and that’s a sign of job done for Saracens. 40-13

Well that’s a controversial one. The move itself is great – George wraps around off his lineout and when he’s scragged he throws the ball to Farrell. Farrell passes to Tomkpins, who hurls a lovely flat pass to Maitland. The wing surges up the right tramline, and as he flirts with touch he thrown the ball inside that comes off the head of the Bristol defender before bouncing kindly for Malins to juggle and score his second. However, there’s a question mark over Maitland’s left boot and whether his heel is in touch, and Malins may even have dropped it too.

But after viewing the replays Foley is happy with both and gives the try. Bristol aren’t happy with that one, while Farrell misses the conversion this time around. 33-13.

Changes for both sides. Titi Lamositele, Will Skelton and Richard Wigglesworth are on for Koch, Kruis and Spencer, while Bristol deploy Max Lahiff for Afoa. They’re also forced to send on replacement hooker Will Capon for wing Frickley due to Thacker’s yellow card.

It’s getting worse for Bristol. Back-to-back penalties arise when Woolmore collects the ball offside from Piutau’s drop, and then when Thacker enters the subsequent lineout maul from the side, referee Tom Foley has seen enough. The yellow card comes out and the hooker is sent to the sin-bin.

This one is much more simple. Both Koch and Mako Vunipola drive the ball up into the Bristol 22 to get the hosts on the front foot, and from there Spencer comes left to Farrell, who pops a short pass to Earl on his left shoulder to gallop over. Farrell’s conversion curls around the upright and through to increase the lead further. 28-13

That’s one for the end-of-season highlights reel! From the scrum, Maitland comes into the line off the blindside wing, receiving the ball from Spencer and passing left to Barrett. With Farrell looping round behind, Bristol’s attentions are drawn to the fly-half and it allows Nick Tompkins to scythe through the heart of the defence, cutting back to round Frickley and touch down behind the posts. Farrell converts and Saracens build the lead. 21-13

Saracens get an early put-in inside the Bristol half that gives them a good platform to attack…TRY FOR SARACENS!

Bristol kick off to begin the second half!

Half-time: The teams emerge ready for the second half as we get this one-point game underway once again.

Wonderful stuff from the full-bak Max Malins! Saracens again get the penalty advantage, and with only Malins and Maitland not in the maul, you think it’s a shot to nothing before coming back for the penalty. However, Spencer hurls a pass out to Malins that he picks up off his toes, and he fashions to send a cross-field kick out to Maitland only to step the on-rushing Bedlow and gas his way to the line.

Farrell adds the conversion and Saracens just about take a lead in at half-time.

The maul goes down yet again, and once more the penalty doesn’t come. However, Foley didn’t appear to give Bristol a final warning last time and so it comes this time around, when really the yellow should have been produced there. Saracens go to the corner again as the clock goes red.

Itoje does what Itoje does best and gets through the maul to sack the ball-carrier, and from there Saracens win the penalty that Farrell turns down to go for touch just inside the 22. It would have been a touch kick from all of 38 metres into the wind to be fair.

Saracens come right with a penalty advantage for pulling down the lineout, and after some excellent footwork from Maitland and not-so-excellent handling from Mako Vunipola, Foley comes back for the penalty. Saracens go to touch on the five-metre, and once again the maul is pulled down. These infringements are starting to rack up…Farrell goes to the corner again.

Take a bow Toby Frickley. Billy Vunipola comes round to the openside again but this time Saracens attempt to catch out Bristol by the No 8 popping the ball to Barritt. You’d expect the centre to crash his way over, but Frickley comes off his wing to halt the Saracens skipper in his tracks, and the sudden stop in momentum helps the Bristol pack to pile in and win the turnover scrum. From there, Bristol win the penalty and Sheedy clears the lines. Excellent play from Frickley and Bristol, and that’s a massive chance gone begging for Saracens.

Billy Vunipola picks and goes from the scrum and comes within a whisker, and it takes Bristol hands to disrupt the ball that leads to a full penalty in front of the posts. Saracens have their tails up though, and the pack call for the scrum as a sign of their confidence. They need points here.

What time does it start?

The match kicks off at 3pm.

Where can I watch it?

The game will not be shown live on television in the United Kingdom, but you can follow live updates from Allianz Park with The Independent.