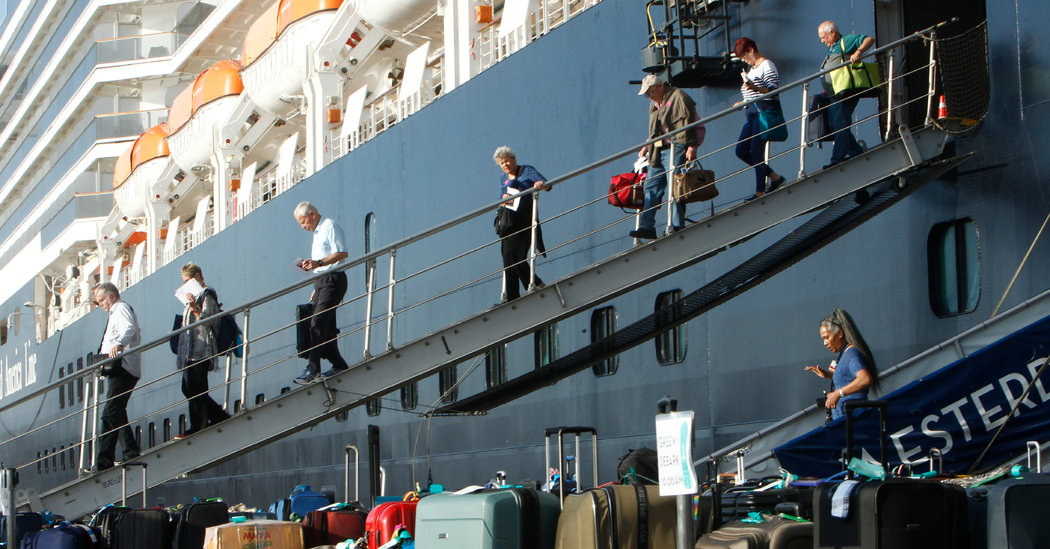 The number of reported coronavirus cases has risen to more than 68,500, with nearly 1,700 deaths, including a man in Taiwan with no history of travel to mainland China. Here’s the latest.

Though the rate of increase has slowed, there are new fears of global transmission after an 83-year-old American woman tested positive for the coronavirus in Malaysia. She was one of more than 1,000 passengers who left a cruise ship last week in Cambodia. Many went on to other destinations, including to airports in the U.S., the Netherlands and Australia.

Europe had its first fatality from the virus when an 80-year-old Chinese tourist died in Paris, an official said on Saturday, the outbreak’s first fatality outside Asia. The man and his daughter are among 12 confirmed cases in France. European officials are scrambling to deal with the spread of the disease on the continent, where so far there have been 44 cases.

In Japan, some American passengers were evacuated from a cruise ship that now has 355 confirmed coronavirus cases. Canada and Hong Kong say they will also evacuate their nationals from the ship.

In China: Placing himself in the middle of questions about the government’s response, President Xi Jinping said in a newly released speech that he took charge of the outbreak in early January, nearly two weeks before he first spoke publicly about it and when the government was still saying human-to-human spread seemed unlikely.

Another angle: Although there are only a handful of known cases in the U.S., the outbreak has some Asian-Americans feeling an unnerving public scrutiny for just sneezing.

Unease at the Justice Department after Trump attacks

After a week of tumult, lawyers across the Justice Department said that they were left fearful about political interference after President Trump’s attacks on federal prosecutors and after Attorney General William Barr’s response to the attacks.

In a series of interviews, career prosecutors told The Times that they feared that Mr. Barr’s decision to give Roger Stone, the president’s longtime friend and former political adviser, a more lenient sentence after Mr. Trump weighed in on the case was undermining the department’s reputation for upholding the law without bias.

Though some were relieved that Mr. Barr had defended the department in a televised interview, others said that since taking office, the attorney general has devoted much of his authority to bolstering the president.

Related: More than 1,100 former federal prosecutors and Justice Department officials called on Mr. Barr to step down over what they described in an open letter as his “interference in the fair administration of justice.”

Behind U.S.-Iran clash: months of misjudgments

A nine-month period that shook up the already tense relationship between Iran and the United States began with the Trump administration’s escalation of sanctions and ended with Washington and Tehran in a direct military confrontation.

Our reporters traced the path to last month’s violent standoff, finding a story of miscalculations by both sides.

What’s next? “The chess match continues,” our reporters write. The Senate tried to constrain Mr. Trump, voting last week to require that he seek congressional authorization before taking further military action against Iran. But the measure lacked the support needed to override a promised veto.

Another player: Once based in Iraq, a secretive group of celibate Iranian dissidents — the Mujahedeen Khalq, or People’s Jihadists — gave our reporter a tour of their camp in Albania.

Adjusting to life in a fire-scarred Australia

The wildfires that ravaged the country are changing what it means to be Australian.

“In a land usually associated with relaxed optimism, anxiety and trauma have taken hold,” our Sydney bureau chief writes in an analysis. And summers are set to get only hotter and smokier, promising humming air filters and children kept indoors.

As Australians stumble toward new ways of work, leisure and life, our bureau chief asks, will a conservative government skeptical of climate change change course?

On the ground: Fires are still burning south and west of New South Wales. In total, tens of millions of acres have been incinerated.

If you have six minutes, this is worth it

Somalia has endured three decades of crises, while the government struggles to provide even basic public services. So young Somalis have sprung into action, as volunteers.

A turning point came in 2017, when a truck bombing in Mogadishu killed 587 people and injured 316 others. Hundreds of volunteers, like Dr. Amina Abdulkadir Isack, above right, identified victims, launched social media campaigns to appeal for global attention and collected tens of thousands of dollars to help with ambulance services.

“It showed us we could do something to save lives,” she said.

Here’s what else is happening

U.S.-Europe relations: An annual security gathering in Munich over the weekend displayed the division and unease that have plagued the NATO alliance. Secretary of State Mike Pompeo declared that “the West is winning,” and insisted that the Trump administration was not retreating from its alliances. But Emmanuel Macron, the French president, urged Europe to create its own policy toward Russia, not just through the lens of a growing cold war with America.

Paris elections: France’s health minister was named as a new candidate for mayor of Paris on Sunday after a frantic search to replace the original contender, who withdrew after a leak of explicit videos on social media.

Snapshot: Above, emergency workers rescued residents of Nantgarw, Wales, from flooding on Sunday. Britain was battered by severe weather for the second consecutive weekend, with more than half a month’s worth of rainfall falling in one day.

In memoriam: Barbara Remington, the illustrator whose covers for J.R.R. Tolkien’s “The Lord of the Rings” trilogy and “The Hobbit” achieved mass-cult status, died at 90.

What we’re reading: This essay by the writer and critic Paraic O’Donnell in The Irish Times. Steven Erlanger, our diplomatic correspondent in Europe, describes it as a “moving, sometimes angry contemplation of a life slowly destroyed by M.S., bringing thoughts of how gardens are born in destruction, and how this progressive disease moves with the seasons.”

Now, a break from the news

Cook: Roasted salmon with fennel and lime is elegant and supremely simple.

Read: “Run Me to Earth,” by Paul Yoon, is a meditation on the devastating nature of war and displacement that begins under a hail of American firepower in war-torn 1960s Laos. It’s one of 10 new books we recommend.

Smarter Living: We have guidance on how to be a supportive partner during pregnancy (and beyond), which is good for everyone involved, including the baby.

And now for the Back Story on …

Last week we reported that Radio Sputnik, a propaganda arm of the Russian government, is now broadcasting on three Kansas City-area radio stations. In a modern spin on propaganda, it focuses on sowing doubt about Western governments and institutions.

Neil MacFarquhar, our national correspondent who wrote the story, previously served as the Times bureau chief in Moscow. We talked with him in the following conversation, which has been condensed and edited for clarity.

You wrote that one Sputnik station shares a frequency with a smaller jazz station in Kansas City. What’s it like to be listening to Charlie Parker one minute, and propaganda the next?

You get roughly, “This is Radio Sputnik, broadcasting live from Washington D.C., the capital of the divided states of America.”

The station that has the Sputnik frequency is fairly strong, while the station broadcasting jazz is relatively weak. If you’re by the more powerful transmitter, you get Radio Sputnik.

Is this kind of propaganda relatively unprecedented in U.S.-Russian relations?

It depends on your interpretation of “propaganda.” There have previously been radio broadcasts of foreign-owned and -financed radio stations into the United States.

But part of the change is the more sour mood between the two capitals. Under Putin, there has been a much more concerted effort to undermine Western institutions.

The Facebook campaigns focused on the 2016 election and other things we’ve heard about were direct attempts to influence specific groups of people, so it was more manipulative. This is much more subtle. It’s not old-school propaganda, it’s American hosts — before they got to Sputnik they were fairly down on the United States from the left or right — trying to paint the U.S. as damaged goods.

Is it jarring compared to other radio stations on the dial?

It’s talk radio, so they’re riffing off of headlines about impeachment, Kobe Bryant, coronavirus, that kind of thing. The bureau chief in Washington says they’d like to have a station in New York but the cost is bigger than their budget allows.

That’s it for this briefing. See you next time.

Thank you
To Mark Josephson and Eleanor Stanford for the break from the news. You can reach the team at [email protected]

P.S.
• We’re listening to “The Daily.” Our latest episode is about the post-impeachment President Trump.
• Here’s today’s Mini Crossword puzzle, and a clue: Alternate: Rock genre for The Strokes and The Shins (five letters). You can find all our puzzles here.
• A. G. Sulzberger, the Times’s publisher, recently received an award from the New England First Amendment Coalition. Read his remarks.