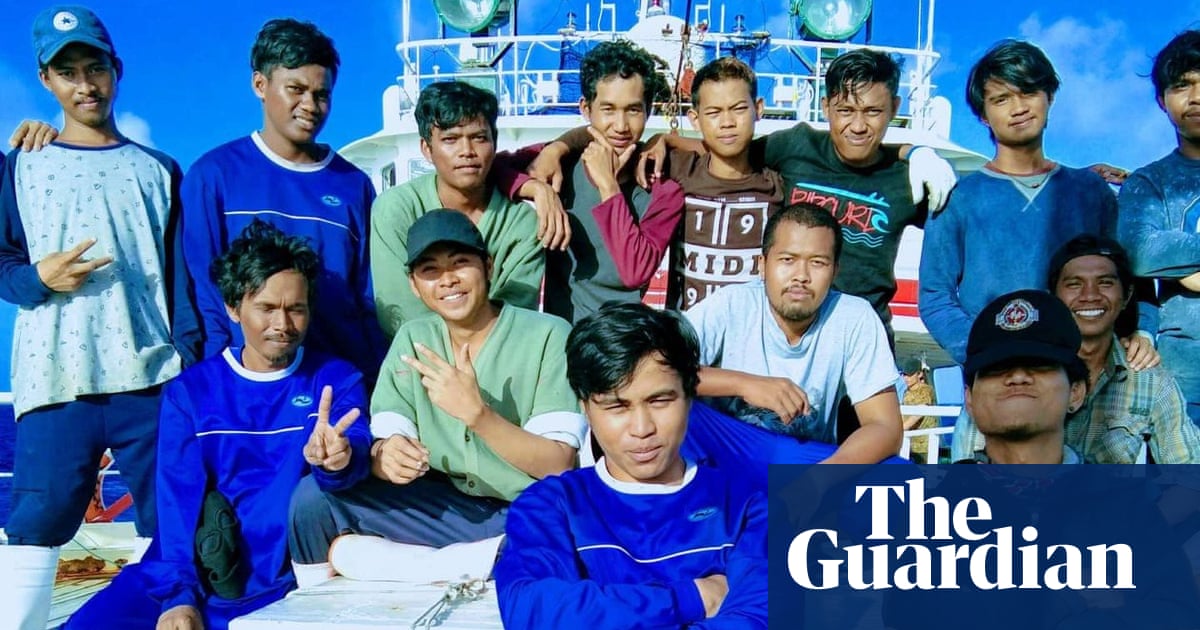 When Sepri and Ari boarded a Chinese tuna fishing vessel in February 2019, the 24-year-old best friends were excited at the prospect of working together and having adventures at sea. Lured by the promise of high wages after being jobless back in their village in Indonesia, they told their families they would bring home “a lot of money” and make them proud.

Neither of them saw their families again. Both men died at sea after weeks of agony: working 18-hour days without adequate food or water and under the threat of violence, according to survivors who gave harrowing accounts of the deaths to the Guardian – including their bodies being thrown overboard.

In all, 24 Indonesian crew set off on the Long Xing 629, owned by Dalian Ocean Fishing Company, which was reportedly engaged in illegal fishing. Only 20 survived. The ones who made it said they were “treated like animals”, and lawyers for the crew described the case as a “textbook example” of forced labour and human trafficking at sea. Interpol have long warned of a link between illegal, unregulated and unreported (IUU) fishing and human rights abuses, including modern slavery.

The Long Xing 629 was legally licensed to catch tuna, but was also involved in finning endangered sharks: cutting off the fins, which are highly prized as a delicacy, and discarding the body. During the year or so it was at sea, it allegedly amassed nearly 800kg of shark fins.

The crew was recruited from small villages, said Yudha, one of the survivors. In the summer of 2018, Yudha, then 18, and a graduate from Makassar Nusantara fishing school in South Sulawesi, was approached by a “sweet-talking” broker via a Facebook page used by Indonesian fishermen looking for work.

He was promised a two-year contact earning around $450 (£360) a month plus bonuses, he told the Guardian. “He [the recruiter] said the work was good,” said Yudha. He was told he could start in a month on an octopus vessel.

But when he travelled to Pemalang to sign a contract with the recruitment agency, he found the monthly salary was only $300, he said. The contract stipulated a “security deposit” of $900, and there was an additional deduction of $750 for “processing documents”, all of which he’d have to work to pay off.

Once aboard, he said his passport was confiscated, and he discovered the boat was in fact registered as a “tuna longliner”, where the work is notoriously hard. He was also expected to catch sharks for their fins. The consumption of shark fins is not illegal in China, but shark finning is banned by the fishing body managing the western central Pacific Ocean, of which China is a member.

The hours were punishing, he said, typically 18 hours a day. One shift they did not sleep at all.

“There was no break, except for eating and only five minutes,” said Yudha. “They would ring a bell: ‘Let’s get back to work.’”

The Indonesian crew were forced to drink distilled seawater, which was yellow and salty, he said. The Chinese officers drank bottled water. The food consisted of fish with expired noodles and almost no fresh produce. Sometimes, if a tuna came off a hook and the captain was angry at the missed catch, the crew would not eat at all.

Yudha claimed he witnessed physical abuse, too. “My friend was beaten because he was slow,” Yudha said. The crew stood up for themselves. “In solidarity, the Indonesians showed the Chinese crew their knives and machetes until the captain came down. There are many Indonesians. Fighting one means fighting all. Chinese crew did not dare any more.”

But the living conditions caught up with them. In November, Sepri began complaining of breathlessness, chest pains and swelling limbs. On 21 December 2019, he collapsed.

“I checked his pulse, it was gone,” said Yudha. Against the wishes of the crew, the captain dumped the body overboard.

Yudha, too, had begun to suffer the same symptoms as his friend. So did another man, Alfatah. The pair became fearful. “I was afraid the same would happen to me,” Yudha said. “I begged the captain, if I pass away, I want you to send my body to my parents in Indonesia.”

The captain called for a sister vessel, the Long Xing 802, to take the sick crew to Samoa. It arrived seven days after Sepri’s death.

Shortly after they had transferred to the new boat, “Alfatah told me, ‘Yudha, I can’t stand any more’. He said it hurts so much. I told him, ‘Hold on brother, try to get to land’. But after eight hours, in front of my eyes, he passed away.”

Again, the new captain dumped Alfatah’s body overboard instead of repatriating it to Indonesia. Yudha was told the deaths were caused by a virus and the bodies had to be disposed of at sea.

Meanwhile, back on the first boat, more of the crew were falling sick. In late March, another nine crew were transferred to another ship, the Tian Yu 8. They were suffering from breathlessness and swollen feet, according to Yusuf, a crewman on the new boat.

By 30 March, a third crewman, Ari, was dead. Again, the captain decided to dispose of his body at sea. The furious crew decided to record the evidence.

“We tried to plead with the captain not to do it,” said Yusuf. “I was sad and angry because of my friend’s body going into the sea. They were treating human beings like animals. That was why they took the video.”

The Tian Yu 8 finally reached shore in Busan, Korea, where the crew were taken to a medical centre. A fourth sailor, Efendi, died there.

No autopsies were ever conducted on any of the dead crew, although Efendi tested negative for Covid-19. The medical centre reportedly said he died of pneumonia.

Yudha said he was dropped off in Samoa and given just enough money to fly to Jakarta, as well as $638 in total pay for 10 months at sea. He said he was told by an Indonesian doctor that he was malnourished and had beriberi, a disease caused by vitamin B1 deficiency.

When the crew released their video footage to the media in Korea and Indonesia, it hit the headlines. Indonesian authorities branded the fishermen’s treatment “inhumane” and demanded an inquiry by China.

“They told us Sepri [had been] sick and died after being treated with medicine,” she recalled. “I just broke into tears.” She asked why the body wasn’t returned to Indonesia for a proper burial and was told the recruiters “couldn’t contact the vessel”.

The agency paid her 250m rupiahs (£14,000) in compensation, but she also wants action to be taken to prevent it happening again.

“The Indonesian government should be firm with this incident. It must be dealt with thoroughly,” she said. “It should be written in our law for Indonesian crew to be protected. We want justice.”

On the back of the case, Indonesia has launched a human trafficking investigation into the Indonesian recruiters, and have since arrested the heads of three agencies, accusing them of paying as little as $30 a month, less than a dollar a day.

Azizah Hapsari, of the Environmental Justice Foundation, called the Long Xing 629 case the “tip of the iceberg”.

“In an effort to keep profits up amid declining fish populations, unscrupulous operators are resorting to human rights abuses and denying crew basic medical care,” he said. “This is possible because large parts of the global fishing industry operate in the shadows, away from government and public scrutiny.

“We know about this because of the video. But how many do we not know about?”

Jong-chul Kim, a South Korean lawyer with Advocates for Public Interest Law who interviewed some of the crew in Busan said: “This is a textbook example of human trafficking at sea and it is clearly linked to IUU fishing.”

The conditions imposed on the Indonesian crew constitutes forced labour and human trafficking, he said.

“Their passports were held by the captain, they could not leave the vessel and did not see port in 13 months,” he said. “Under their unfair contracts, if they terminated in the middle, the cost of the return ticket is borne by the crew. And half of their salary was taken in security deposits.”

The Chinese foreign ministry told the South Morning China Post and the Indonesian foreign ministry that it was investigating the matter, but that some of the allegations were “inconsistent” with its own information.

Dalian Ocean Fishing Company did not respond to a request for comment.