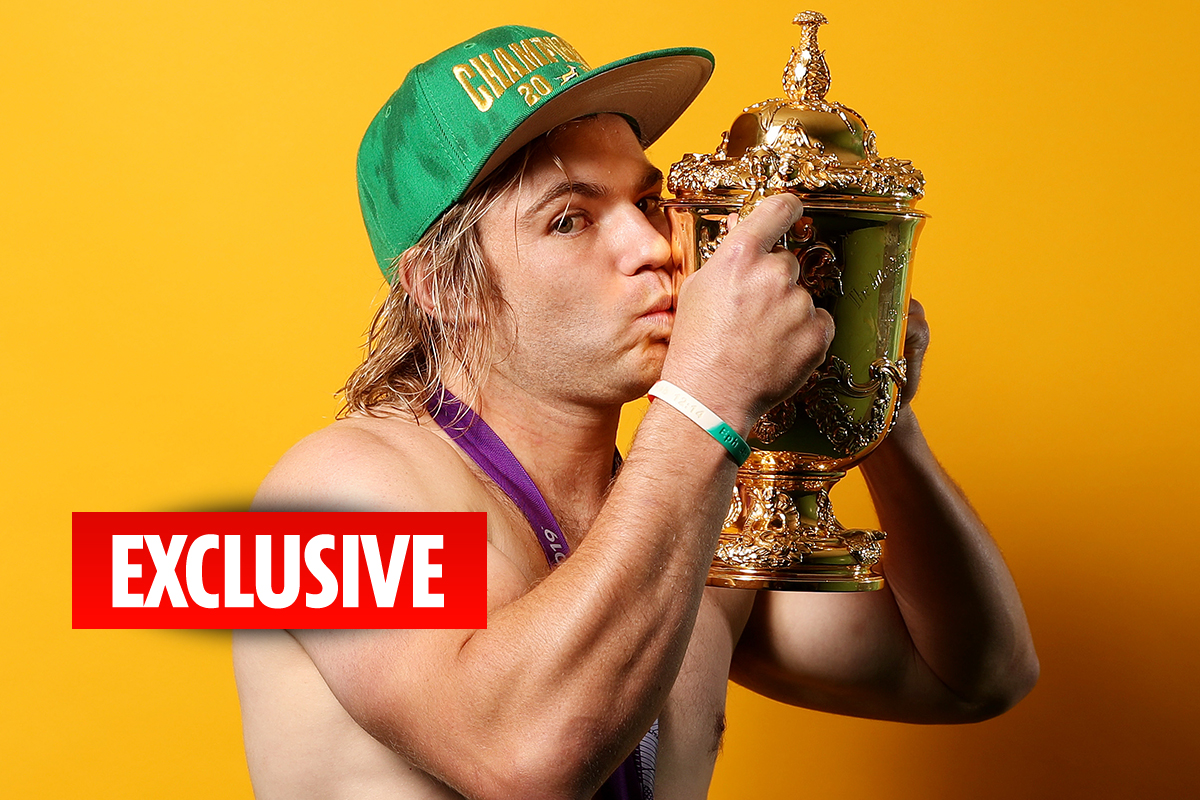 FAF DE KLERK reckons one day he could flog a pair of his famous ‘budgie smugglers’ to Prince Harry.

The South Africa and Sale Sharks star mooted his royal fan as a future wearer of his now iconic Rainbow Flag swimming trunks.

De Klerk has already raffled off one pair as part of a charity drive to raise more than £150,000 to help feed thousands of Springboks fans living in poverty back home.

And the 28-year-old World Cup winner reckons that if he were to ever auction off his second cherished set, RFU patron Harry could be keen.

The Prince met the near-naked scrum-half as he downed beer out of the Webb Ellis Cup after beating England 32-12 in last year’s final in Japan.

And De Klerk joked: “He might be keen. I would like to think they’re worth a bit but you never know!

“There is another pair I could sell off in a few years.”

De Klerk is now back in Sale’s kit in England, having spent lockdown in the southern hemisphere on a game farm owned by his girlfriend’s parents.

With the rugby season due to start again on August 15, second-placed Sale are now hoping De Klerk and his fellow World Cup hero Lood de Jager can inspire them to a first Premiership title since 2006 — even if it is all behind closed doors.

The goal is to get the Premiership trophy. It would be amazing to get another one to go with the World Cup.

De Klerk, who has also signed a long-term deal and could even finish his career at the AJ Bell Stadium, said: “The goal is to get that trophy. It would be amazing to get another one to go with the World Cup.

“We have been off for so long now and I haven’t played a lot of rugby this year, so I am so excited and there is a real sense at Sale of wanting to play well and get going again.

“We are second and are going to do as well as we can — fans or no fans.

“We know there are a lot of clubs in the Premiership that thrive off their fans, so it will be interesting to see how they cope and adapt.”

The next 18 months could be the most trophy-laden of De Klerk’s career.

The world-class No 9 is also likely to be part of a Springboks side hunting down the British & Irish Lions on home soil.

Yesterday marked a year to go until the first match of the 2021 series — with Warren Gatland’s tourists looking for a first series win against the Boks since 1997.

De Klerk, who has just signed up to become an ambassador for health drink iPRO, added: “The Lions is a massive personal goal.

A QUESTION OF MATT

What are the lyrics to World In Union and who is signing World Cup anthem?

“But I have to keep playing well, it’s not a case of Rassie Erasmus picking the World Cup squad.

“A Lions series is almost like playing in a World Cup and they are going to have a top team. Growing up, I never thought I would be in a position to play against them.

“It’s a big occasion — even the provincial midweek games.”